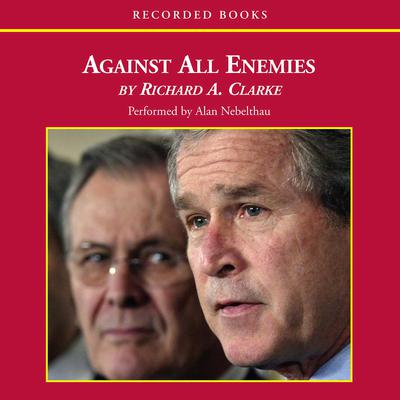 Against All Enemies: Inside America's War on Terror

By Richard A. Clarke
Read by Alan Nebelthau

Terrorism expert and 30-year national security veteran Richard A. Clarke served as the counterterrorism czar for both Bill Clinton and George W. Bush. No one in America is more qualified to talk about terrorism and policy. This searing indictment of the Bush administration-from its deceptive use of long-discredited data, to its failure to seize vital opportunities-is an essential listen for every American.

Richard A. Clarke completed a thirty year career in national security, during which he held positions in the White House, the Pentagon, the Intelligence Community, and the State Department. He worked in the White House National Security Council for presidents George H. W. Bush, Bill Clinton, and George W. Bush for an unprecedented ten consecutive years, and he served on President Obama’s Review Group on Intelligence. After leaving full-time government service, Clarke wrote six books, both fiction and nonfiction, taught for five years at Harvard’s Kennedy School, has been an on-air consultant for ABC News for a decade, created and manages a cyber security and venture capital related consulting firm, serves on corporate boards, and is chairman of the Board of Governors of the Middle East Institute.