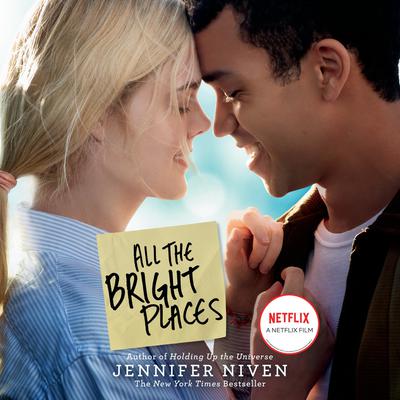 This New York Times bestselling love story about two teens who find each other while standing on the edge is soon to be a Netflix film starring Elle Fanning and Justice Smith! Theodore Finch is fascinated by death, and he constantly thinks of ways he might die. But each time, something good, no matter how small, stops him. Violet Markey lives for the future, counting the days until graduation, when she can escape her Indiana town and her aching grief in the wake of her sister's recent death. When Finch and Violet meet on the ledge of the bell tower at school, it's unclear who saves whom. And when they pair up on a project to discover the "natural wonders" of their state, both Finch and Violet make more important discoveries: It's only with Violet that Finch can be himself--a weird, funny, live-out-loud guy who's not such a freak after all. And it's only with Finch that Violet can forget to count away the days and start living them. But as Violet's world grows, Finch's begins to shrink. Includes a PDF Help Line Resource Guide and a Note Read by the Author.

“This heartbreaking love story about two funny, fragile, and wildly damaged high school kids named Violet and Finch is worth reading. Niven is a skillful storyteller who never patronizes her characters—or her audience.” —Entertainment Weekly
“Pick up this heartrending novel about a girl who vows to live with purpose after bonding with a boy who plans to end his own life.” —SELF magazine
“At the heart—a big one—of All the Bright Places lies a charming love story about this unlikely and endearing pair of broken teenagers.” —New York Times Book Review
“In her YA debut, adult author Niven creates a romance so fresh and funny…The journey to, through, and past tragedy is romantic and heartbreaking, as characters and readers confront darkness, joy, and the possibilities—and limits—of love in the face of mental illness.” —Publishers Weekly (starred review)
“Many teen novels touch on similar themes, but few do it so memorably.” —Kirkus Reviews (starred review)
“The writing in this heartrending novel is fluid, despite the difficult topics…Finch in particular will linger in readers’ minds long after the last page is turned.” —School Library Journal (starred review)
“Violet, a popular girl who is still reeling from the death of her older sister in a car accident that she survived, and Finch, a ‘freak’ who is struggling to cope with bipolar disorder, met on the ledge of the school’s bell tower. Who saved whom? Kirby Heyborne is outstanding as Finch, using pacing and tone to make the young man believable as he navigates his mania and depression, dreaming up ways to die, then finding reasons to embrace life. Ariadne Meyers projects the voice of a well-loved but damaged teenager who is afraid to re-enter life but is drawn to this new friend who needs her as much as she needs him. The story—dark and sad yet clever and funny—shines a light on the timely and important issue of teen mental illness.” —AudioFile

Jennifer Niven’s first book, The Ice Master, was named one of the top ten nonfiction books of the year in 2000 by Entertainment Weekly. A Barnes & Noble Discover Great New Writer, she has ten different publishers in ten separate countries, and The Ice Master has been translated into eight languages. Jennifer and her work have appeared in Newsweek, Entertainment Weekly, Talk, Glamour, the New Yorker, Outside, the New York Times Book Review, the London Daily Mail, the London Times, and Writer’s Digest, among others. Dateline NBC, the Discovery Channel, and the History Channel have featured The Ice Master in hour-long documentaries, and it has been the subject of numerous German, Canadian, and British television programs.