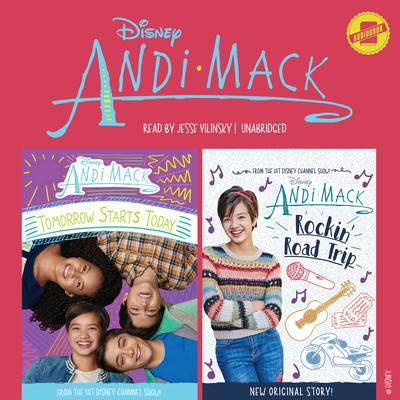 Based on the Disney Channel series Andi Mack, these original novels extend the world and story of the hit show.

Andi Mack is turning thirteen, and she feels like her life needs a little shaking up. But when her wild and crazy older sister, Bex, returns home and reveals a big secret, Andi is, well . . . SHOOK! Will life as she knows it ever be the same?

Then Bex convinces Andi to throw a huge house party while the parents are away. It’s all fun and glow sticks until mean-girl Amber shows up. Bum-mer! Can the Mack girls keep the good times going, or is their fiesta doomed to fail?

Now that Andi has settled into her new life with Bex as her mom, she’s worried that the two of them have become—gasp—BORING. (As if!)

So Andi convinces Bex to take her to the Mountain Jam Music and Arts Festival, even though Bex worries it might offer more thrills than Andi can handle.

It’s sure to be an adventure Andi and Bex will never forget. But will problems with Bex’s motorcycle prevent them from getting there on time? Will the festival be everything Andi is hoping for? And can Andi and her friends handle all the twists and turns the weekend has in store for them?

Disney Publishing Worldwide (DPW) is the world’s largest publisher of children’s books, magazines, and apps, with over 700 million products sold each year. DPW consists of an extensive worldwide books and magazines licensing structure as well as vertically integrated publishing imprints, including Disney-Hyperion and Disney Press in the US and Disney Libri in Italy. DPW’s digital products include bestselling e-book titles and award-winning original apps. Disney English is DPW’s English language learning business, which includes learning centers in China and a worldwide retail-licensing program. Headquartered in Glendale, California, DPW publishes books, magazines, and digital products in 85 countries in 75 languages. For more information visit www.disneypublishing.com.