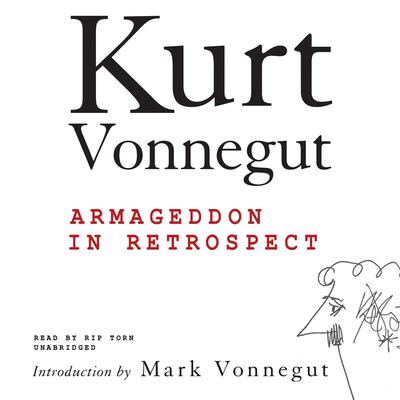 Armageddon in Retrospect: And Other New and Unpublished Writing on War and Peace

The late, great Kurt Vonnegut wrestles with the horrors of his age in this collection of unpublished writings that showcase his trademark humor and humanism. Varied in form and tone, the pieces are united in theme as they reflect on facets of war and peace. Vonnegut is by turns funny and poignant, serious and irreverent as he discusses the fantasies of Army men, the harrowing firebombing of Dresden, and the attraction of violence to young boys. An early letter to his parents describing his own experiences in war is a uniquely personal peek at the psychological genesis of all his future writings, in which he would learn to express his moral outrage through comic absurdism.

“Vonnegut’s voice returns full force…full of his characteristic humor…Vonnegut lets go some of his zingers and does what he always did best, tell the truth through jokes.” —Publishers Weekly (starred review)
“An engaging compilation of twelve of the author’s most compelling writings…Perhaps the most interesting aspect of the essays is their variety…Vonnegut does not mince words, and the material is thought-provoking, captivating, and humorous.” —AudioFile
“As in most of his celebrated writings, Vonnegut strikes a fine balance here between the impersonal horrors of war and the mundane coping mechanisms of its victims, between past realities and future possibilities and, ultimately, between good and evil. A BookPage Notable Title.” —BookPage
“Irreverent, sardonic and elliptical…we hear that unique, vigorous voice.” —Kirkus Reviews