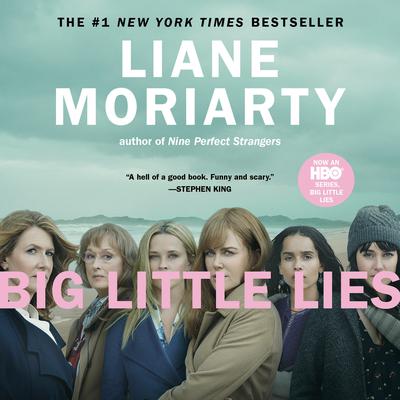 An Entertainment Weekly “Must Read” for June 2014

A July 2014 Amazon Best Book of the Month

From the author of Nine Perfect Strangers, Truly Madly Guilty, and The Husband’s Secret comes the #1 New York Times bestselling novel about the dangerous little lies we tell ourselves just to survive.

A murder...A tragic accident...Or just parents behaving badly? What’s indisputable is that someone is dead.

Madeline is a force to be reckoned with. She’s funny, biting, and passionate; she remembers everything and forgives no one. Celeste is the kind of beautiful woman who makes the world stop and stare but she is paying a price for the illusion of perfection. New to town, single mom Jane is so young that another mother mistakes her for a nanny. She comes with a mysterious past and a sadness beyond her years. These three women are at different crossroads, but they will all wind up in the same shocking place.

Big Little Lies is a brilliant take on ex-husbands and second wives, mothers and daughters, schoolyard scandal, and the little lies that can turn lethal.

“Irresistible…Exposing the fault lines in what looks like perfection is a specialty of Liane Moriarty…Moriarty’s sly humor and razor-sharp insights will keep you turning the pages to find out.” —People
“[A] darkly comic mystery surrounding a disastrous parents’ night at an elementary school fundraiser…[in which] the truth remains tantalizingly difficult to sort out. Deservedly popular Moriarty invigorates the tired social-issue formula of women’s fiction through wit, good humor, sharp insight into human nature, and addictive storytelling.” —Kirkus Reviews (starred review)
“Lee’s unusual vocal timbre coupled with outstanding acting makes this a listening experience you can’t tear yourself away from. What a delight. Winner of AudioFile Earphones Award.” —AudioFile
“If you’re looking for a novel that will turn you into a compulsive book finisher, look no further. Moriarty has produced another gripping, satirical hit…. Its can’t-put-downability comes from its darker subplots… A book that will make you appreciate the long days of summer.” —Oprah.com
“A fun, engaging, and sometimes disturbing read…Moriarty is back in fine form.” —USA Today
“The secrets burrowed in this seemingly placid small town…are so suburban noir they would make David Lynch clap with glee.” —Entertainment Weekly
“Ms. Moriarty’s long-parched fans have something new to dig into…that may give Big Little Lies even more staying power than The Husband’s Secret.” —New York Times
“Moriarty unlocks secrets hidden deep in suburbia. Artfully construed.” —Barnes&Noble.com
“Moriarty has produced another gripping, satirical hit.” —Huffington Post
“Tolls a warning bell about the big little lies we tell in order to survive. It takes a powerful stand against domestic violence even as it makes us laugh at the adults whose silly costume party seems more reminiscent of a middle-school dance.” —Washington Post
“[Big Little Lies] is remarkably new and fresh and winning…Moriarty keeps this high-concept plot aloft, largely because she infuses it with such wit and heart. She also knows not to overplay the message she’s sending: that we all tell lies—to each other and, more importantly, to ourselves.” —Amazon.com

Liane Moriarty is the bestselling author of nine novels, including the #1 New York Times bestsellers Big Little Lies and Truly Madly Guilty. Her novels have sold more than twenty million copies worldwide and been translated into over forty languages. Big Little Lies is now an Emmy- and Golden Globe-winning HBO series, produced by and starring Nicole Kidman and Reese Witherspoon. Nine Perfect Strangers has been adapted for television, starring Nicole Kidman and Melissa McCarthy.