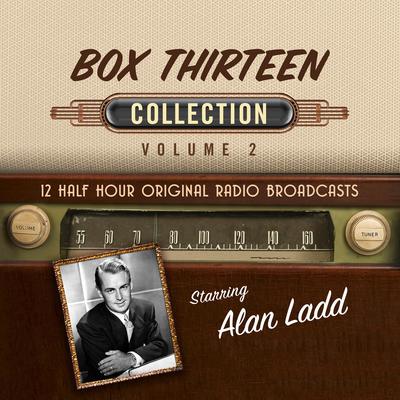 Movie star Alan Ladd played Dan Holiday, retired newspaperman turned fiction writer and adventurer extraordinaire. To gain ideas for his books, Holiday placed an ad in the Star-Times newspaper "Adventure wanted – will go anywhere, do anything – Box Thirteen." It wasn’t long before his Box Thirteen became jammed with adventures galore. Holiday always had more adventure than he had originally sought, because those who responded to his ad never revealed all of their glorious, unusual, and sometimes sinister details until they met in person and the adventure had already begun. Silvia Picker played Holiday's scatter-brained secretary, Suzy. Suzy added touches of humor to the mystery-adventure and nail-biting storylines. Box Thirteen was produced by Mayfair Productions, a company run by Alan Ladd and Richard Sandville. The name came from Mayfair Restaurant, which Ladd and Sandville owned during WWII. In addition to producing Box Thirteen, Ladd also wrote some of the scripts.