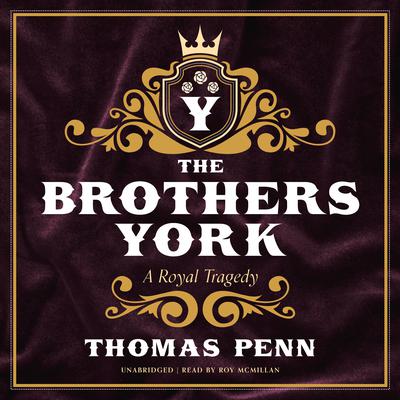 The Brothers York: A Royal Tragedy

A BBC History Magazine Book of the Year Selection

A Sunday Times (London) Best Book of the Year

In early 1461, a seventeen-year-old boy won a battle on a freezing morning in the Welsh marches, and claimed the crown of England as Edward IV, first king of the usurping house of York. It was a time when old certainties had been shredded: by popular insurgency, economic crisis, feuding, and a corrupt, bankrupt government presided over by the imbecilic, Lancastrian King Henry VI. The country was in need of a new hero. Magnetic, narcissistic, Edward found himself on the throne, and alongside him his two younger brothers: the unstable, petulant George, Duke of Clarence, and the boy who would emerge from his shadow, Richard, Duke of Gloucester.

Charismatic, able, and ambitious, the brothers would become the figureheads of a spectacular ruling dynasty, one that laid the foundations for a renewal of English royal power. Yet a web of grudges and resentments grew between them, generating a destructive sequence of conspiracy, rebellion, deposition, fratricide, usurpation, and regicide. The house of York’s brutal end came on 22 August, 1485, at Bosworth Field, with the death of the youngest brother, now Richard III, at the hands of a new usurper, Henry Tudor.

Brothers York is the story of three remarkable brothers, two of whom were crowned kings of England and the other an heir presumptive, whose antagonism was fueled by the mistrust and vendettas of the age that brought their family to power. The house of York should have been the dynasty that the Tudors became. Its tragedy was that it devoured itself.

“Here, the three York brothers spring to ferocious life, and you need strong nerves to meet them. With insight and skill, Penn cuts through the thickets of history to find the heart of these heartless decades.” —Hilary Mantel, #1 New York Times bestselling author
“An epic orgy of color and character.” —The Times (London)
“Pacy, engrossing, and evocative in its details (of feasts and jousts as well as battles and diplomatic skulduggery)." — Times Literary Supplement
“An exceptionally detailed and absorbing narrative history with a gallantly sustained human touch.” —The Telegraph (London)
“Meticulously researched…A vital corrective to the ongoing, polarising battle over Richard III’s legacy.” —The Spectator (London)
“Thrilling…[Penn] brings a novelist’s verve to his telling of events…Penn’s history of betrayal, backstabbing, and paranoia strikes notes that still resonate today.” —The Guardian (London)
“Penn’s weighty new volume takes as its titular subject the lives of these three brothers. But The Brothers York is primarily a biography of the charismatic Edward—and a superb biography at that.” —Financial Times (London)
“Penn’s latest is a treat for dedicated readers of English history who know the outlines of the story covered but wish to learn more.” —Library Journal (starred review)
“This rigorous and richly detailed account breathes new life into the Wars of the Roses.” —Publishers Weekly
“Besides chronicling intrigues, conspiracies, and shifting alliances among a large cast of characters, Penn details the ‘messy reality of life’ among the nobles and their subjects: births and deaths, festivals and weddings, feasts and tournaments, famines and illness, and, not least, the unstoppable gossip that circulated constantly. Rebellious decades come to life vividly in a taut, spirited history.” —Kirkus Reviews