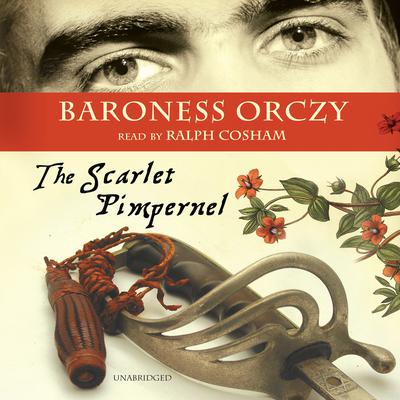 A BookRiot Pick of 50 of the Best Thriller Audiobooks

“Who is this man, this Scarlet Pimpernel?” Each day this question grew more pressing to the rulers of the French Revolution. Only this man and his band of followers threatened their total power. Only this maddeningly elusive figure defied the vast network of fanatics, informers, and secret agents that the Revolution spread out to catch its enemies.

Some said this man of many disguises, endless ruses, and infinite daring was an exiled French nobleman, returned to wreak vengeance. Others said he was an English lord, seeking sheer adventure and supreme sport in playing the most dangerous game of all. But of only one thing could those who sought him be sure. They knew all too well the symbol of his presence, the blood-red flower known as the Scarlet Pimpernel.

This timeless historical adventure is an irresistible blend of romance, intrigue, and suspense.

“Ralph Cosham delivers a fine performance of this entertaining classic about an Englishman who rescues French aristocrats from danger during the French Revolution. Cosham gets to play with a range of French and English accents and does an excellent job of coloring voices with character. He even manages to make the somewhat overwrought writing flow so well that the extravagances go unnoticed. This is huge fun.” —AudioFile
“It is something distinctly out of the common, well-conceived, vividly told, and stirring from start to finish.” —Daily Telegraph (London)
“An excellent novel…There is real ingenuity in the plot, and human interest in the characters, and it is an artistic piece of work, thoroughly readable and commendable.” —Church Times (London)
“A swashbuckling adventure tale of epic proportions…an exciting, fast-paced story that is engrossing to read.” —Large Print Reviews