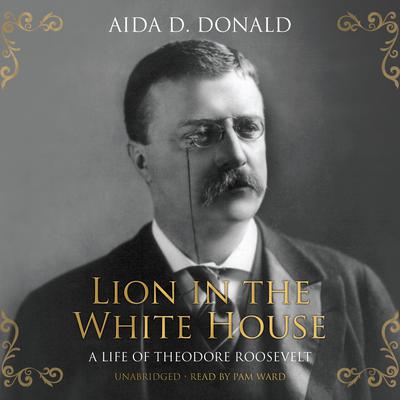 Lion in the White House: A Life of Theodore Roosevelt

New York state assemblyman, assistant secretary of the Navy, New York City police commissioner, governor of New York, vice president, and, at forty-two, the youngest president ever, Theodore Roosevelt—in his own words—"rose like a rocket." He was also a cowboy, a soldier, a historian, an intrepid explorer, and an unsurpassed environmentalist—all in all, perhaps the most accomplished chief executive in our nation's history. Roosevelt built the Panama Canal and engaged the country in world affairs, putting a temporary end to American isolationism. He also won the Nobel Peace Prize, the only sitting president so honored. In Lion in the White House, historian Aida Donald masterfully chronicles the life of this first modern president, illustrating the courage of this great leader.

“In this new biography, Aida D. Donald presents a concise biography of President Theodore Roosevelt...she captures the charm, dynamism and non-stop charge of Roosevelt’s sixty years...Lion in the White House is a solid account of Theodore Roosevelt’s life while bringing a unique perspective to a life fully lived and fully examined.” —Valdosta Daily Times
“Aida D. Donald’s elegant and affectionate portrait of Theodore Roosevelt is less a biography...than a masterful essay on idealism and power…[A] beautifully written and deeply intelligent book.” —Alan Brinkley, Columbia University
“In every inflection and adjective, narrator Pam Ward mirrors the author’s admiration for the man who is often considered to be the country’s first modern president.” —AudioFile
“Donald’s swift prose makes this a satisfying read.” —Publishers Weekly
“Donald’s work serves as a fair introduction to Roosevelt’s life and a fine appreciation of his politics.” —Kirkus Reviews

Aida Donald, a former Fulbright fellow at Oxford University, holds a PhD in American history and has taught at Columbia University. She is a former editor-in-chief of Harvard University Press and worked as a publisher at Hill and Wang and Johns Hopkins University Press. She lives in Lincoln, Massachusetts.