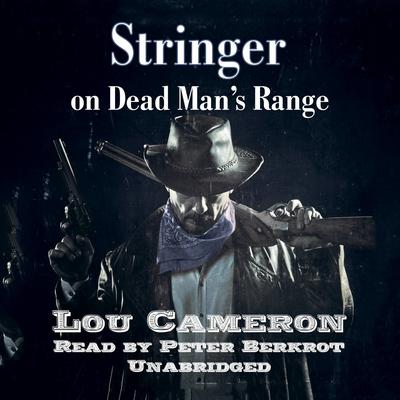 Sheriff Commodore Perry Owens just lost his first election in seventeen years. Maybe folks in the Arizona Territory were ready for a change, and then again, maybe Stringer ought to go have a look-see. The trouble is that Perry has vanished and everyone who knew him is either dead or vanished too. But when hot lead and hard knuckles start flying, Stringer's belt-buckle deep in ghostly mystery and willing women. And even if the ghosts may be hokum, the women are flesh-and-blood beauties.

“With a fast pace and a friendly drawl, Peter Berkrot tells the story of cowboy newsman Stringer…Berkrot is perfect as Stringer, the ultimate hero.” —AudioFile

Lou Cameron (1924–2010) was a prolific American novelist with over three hundred titles to his credit, from adventure, science fiction, crime, and war to movie novelizations, Westerns, and more. In addition to the Stringer Western series, he created the Longarm character, writing under the name Tabor Evans, as well as the Renegade series, writing as Ramsay Thorne. Cameron won the Western Writers of America Spur Award for Best Novel in 1976, and he was also an accomplished comic book illustrator.