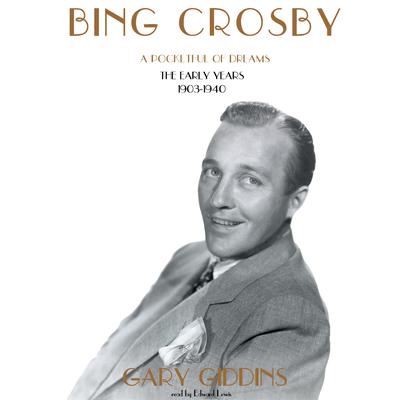 A New York Times Notable Book of the Year

Winner of the ARSC Award for Excellence in Historical Sound Research

From 1934 to 1954, Bing Crosby utterly dominated American entertainment. The number one movie star for five years in a row, he had more hit records than anyone in history. The rise of Bing Crosby was the rise of the American popular culture itself.

In this commanding biography, eminent cultural critic Gary Giddins takes us on the remarkable journey that brought a provincial young law student from Spokane to the pinnacle of the entertainment world. Giddins chronicles Crosby’s rise from vaudeville to Paul Whiteman’s orchestra on to vast success in Hollywood, from his courtship of the beautiful and tragic Dixie Lee to his triumph as the sportsman who created the first celebrity pro-am golf tournament and helped build the Del Mar racetrack. Giddins reclaims Crosby’s central role in American cultural history.

“Those of us who have been waiting all these years to learn everything there is to know about Crosby can only be grateful.” —New York Times Book Review
“Giddins’s intelligent and formidably well-informed biography covering the entertainer’s life from his birth in 1903 through the film that launched his mega-grossing partnership with Bob Hope.” —Washington Post
“A perceptive portrait of Crosby as a man, a singer, a radio personality and a budding movie star in the loose, creative years before he hardened into a monument.” —Publishers Weekly
“Crosby couldn’t have hoped for a finer biographer: elegant writer, informed historian, thorough scholar, and one of America’s most eminent jazz critics.” —Wall Street Journal
“The author’s boundless but utterly clear-eyed enthusiasm for his subject is contagious.” —People
“He represses his style to a degree, as if to clear the decks for Crosby’s own remarkable story.” —New York Newsday
“Giddins has done his work diligently…proves himself an alert…commentator.” —Los Angeles Times
“An unusually detailed look at a life that was thought to be highly public.” —San Diego Union Tribune
“An amazing job of rehabilitating Crosby’s record.” —Atlanta Journal-Constitution

Gary Giddins was a long-time columnist for the Village Voice and is a preeminent jazz critic who received the 1998 National Book Critics Circle Award, the Ralph J. Gleason Music Book Award, and the Bell Atlantic Award for Visions of Jazz: The First Century. His other books include Bing Crosby: A Pocketful of Dreams—The Early Years, 1903–1940, which won the Ralph J. Gleason Music Book Award and the ARSC Award for Excellence in Historical Sound Research; Weatherbird: Jazz at the Dawn of Its Second Century; Faces in the Crowd; Natural Selection; and biographies of Louis Armstrong and Charlie Parker. He has won an unparalleled six ASCAP–Deems Taylor Awards, a Guggenheim Fellowship, and a Peabody Award in Broadcasting.