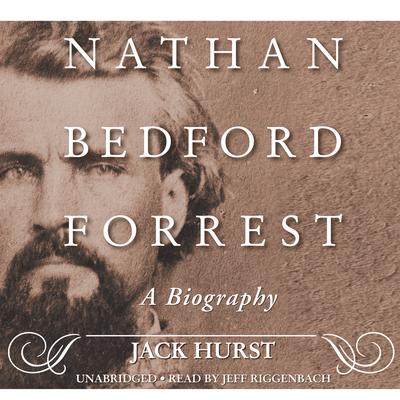 He was a fierce and controversial Civil War officer, an unschooled but brilliant cavalryman, an epic figure in America’s most celebrated war. A superb tactician and ferocious fighter, Nathan Bedford Forrest revolutionized the way armies fought in the course of rising from private to lieutenant general in the Confederate Army.

In this detailed and fascinating account of the legend of the “Wizard of the Saddle,” we see a man whose strengths and flaws were both of towering proportions, a man possessed of physical valor perhaps unprecedented among his countrymen. And, ironically, Forrest—the first grand wizard of the Ku Klux Klan—was a man whose social attitudes may well have changed farther in the direction of racial enlightenment over the span of his lifetime than those of most American historical figures.

“The irrefutable military record of an acknowledged tactical genius…the most complete and complex portrait yet of the Civil War Jekyll and Hyde.”  —Chicago Tribune
“Jack Hurst has written the essential biography of a complex and compelling man who was arguably the Civil War’s most remarkable soldier.” —Amazon.com, editorial review
“Hurst presents a balanced, well-documented study of Nathan Bedford Forrest, whom many consider to be the most brilliant general of the Civil War…[A]n outstanding study of one of the Civil War’s more controversial generals. Essential.” —Library Journal

Jack Hurst is a historian and former journalist who has written for newspapers including the Chicago Tribune, Philadelphia Inquirer, and Nashville Tennessean. His books include Nathan Bedford Forrest: A Biography and Men of Fire. A native of Maryville, Tennessee, and a descendant of both Union and Confederate soldiers, he currently lives with his wife outside Nashville, Tennessee.