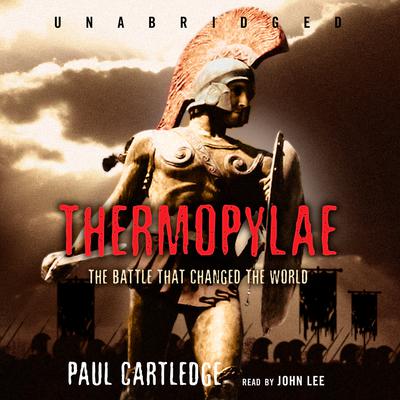 Thermopylae: The Battle That Changed the World

In 480 BC, a vast Persian army, led by the inimitable King Xerxes, entered the mountain pass of Thermopylae to march on Greece, intending to conquer the land with little difficulty. But the Greeks, led by King Leonidas and a small army of Spartans, took the battle to the Persians at Thermopylae and halted their advance—almost. It is one of history's most acclaimed battles, and one of civilization's greatest last stands.

Renowned classical historian Paul Cartledge looks anew at this history-altering moment and shows how its repercussions affect us even today. The invasion of Europe by Xerxes and his army redefined culture, kingdom, and class. The valiant efforts of the Greek warriors, the legendary 300 facing a huge onrushing Persian army at the narrow pass at Thermopylae, changed the way future generations would think about combat, courage, and death.

“Impeccable...Enthralling...Vividly reconstructs [the Spartans’] finest hour.”  —Independent (London)
“Briskly written...Offers a fresh look at the battle and the complex events leading up to it.” —Forbes
“As this beautifully written and stirring saga asserts, the history of Western civilization would almost certainly have been fundamentally different had the Persians prevailed…Cartledge’s account has a special urgency and poignancy. An outstanding retelling of one of the seminal events in world history.” —Booklist
“A masterful account of the causes, preparations for and consequences of the three-day battle in 480 BC...A class in Western civilization that both instructs and entertains.” —Kirkus Reviews

Paul Cartledge has taught Greek history at Cambridge University since 1979 and is also a Fellow at Clare College. Widely acknowledged to be the world’s leading expert on the subject of Sparta and ancient Greece, he is the first A. G. Leventis Professor of Greek Culture (2008) which focuses on the study of more than 1,000 years of Greek cultural achievements and highlights the lasting influence they continue to have on society today. In addition to having written and edited scores of articles and books, including The Spartans: An Epic History; and Thermopylae: The Battle that Changed the World, he is also academic consultant to the BBC and PBS for the series The Greeks: Crucible of Civilization.