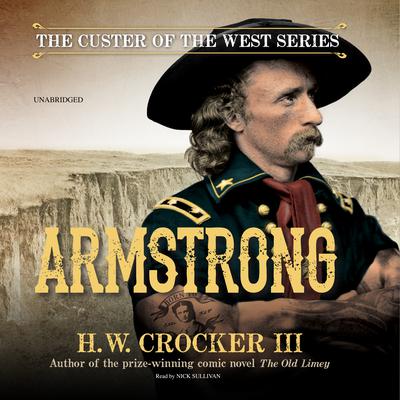 The Custer of the West Series: Book 1

Did you know that George Armstrong Custer survived the Battle of the Little Big Horn and became a gunslinging knight-errant in the West—aided by a troupe of Chinese acrobats, cancan-dancing girls, a rebel-flag-eyepatch-wearing Southern gambler, and a multilingual Crow Indian scout? H. W. Crocker’s rollicking, witty, adventurous new novel Armstrong is an alternative history like you’ve never read before.

“Crocker has created a hilarious hero for the ages. Armstrong rides through the Old West setting right the wrongs, and setting wrong the rights, in a very funny cascade of satire, history, and even patriotism.” —Rob Long, Emmy– and Golden Globe–nominated screenwriter and co-executive producer of Cheers
“The world has a new hero—actually an old hero reimagined—George Armstrong Custer, in this delightfully funny alternative history that’s better, or at least happier, than the real thing.” —Winston Groom, #1 New York Times bestselling author
“Droll satire, this is the West as it might have been if the Sioux hadn’t saved us.” —Stephen Coonts, New York Times bestselling author

H. W. Crocker III is a bestselling author who frequently writes about military history. He is the author of Robert E. Lee on Leadership, The Politically Incorrect Guide to the Civil War, and the prizewinning comic novel The Old Limey. His journalism has appeared in the Washington Times, National Review, American Spectator, and many others. Crocker is the executive editor of Regnery Publishing and lives with his family in northern Virginia.