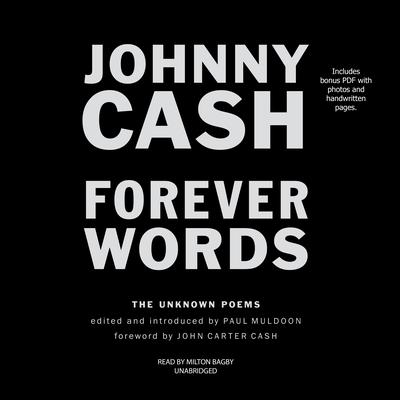 A collection of never-before-published poems by Johnny Cash, edited and introduced by Pulitzer-prize winning poet Paul Muldoon with a foreword by John Carter Cash. Illustrated with facsimile reproductions of Cash’s own handwritten pages.

Since his first recordings in 1955, Johnny Cash was an icon in the music world. In this collection of poems and song lyrics that had never been published before, we see the world through his eyes and view his reflection on his own interior reality, his frailties and his strengths alike. In his hallmark voice, he pens verses about love, pain, freedom, and mortality, and expresses insights on culture, his family, his fame, even Christmas. Forever Words confirms Johnny Cash as a brilliant and singular American literary figure. His music is a part of our collective history, and here the depth of his artistry and talent become even more evident.

“In some ways the poems mirror Cash’s songwriting, with terse ballads of outsiders in love and parables drawn from the Bible…Yet another look at a legend of American music.” —New York Times
“The Man in Black was also an incredibly productive poet who was just as happy to let his pen do the talking…Love, mortality, addiction, humor, spirituality, pain, wonder, hope, heartbreak, freedom, and resignation all weave in and out of Cash’s poetry—just as they did in his songs—in an attempt to paint the most accurate portrait of his true self.” —Rolling Stone
“In retrospect, we should have assumed that outlaw country musician Johnny Cash was leading a double life as a secret poet.” —A. V. Club
“Johnny Cash left behind quite a trove of writings, his son John Carter Cash reveals, and from it this selection of song lyrics, both apparently finished and probably incomplete, has been drawn. Introducing them, editor Muldoon, a Pulitzer Prize–winning poet, touches the right bases for appreciating both them and the recorded balance of Cash’s legacy. Those touchstones are the Scottish border ballads and Scots-Irish traditional song in general, the King James Bible, the cowboy song (especially, its humor and exaggeration), and the assurance of Christian faith; and Muldoon adduces the evidence of those influences directly from pieces in this book. He also argues the timelessness of Cash’s lyrics.” —Booklist

Johnny Cash (1932–2003) was an American icon and country music superstar. In 1980 he became the youngest living person to be chosen for the Country Music Hall of Fame; he was also inducted into the Nashville Songwriters Hall of Fame, the Rock and Roll Hall of Fame, and the Gospel Music Hall of Fame. He won nineteen Grammy Awards, four of them posthumously.