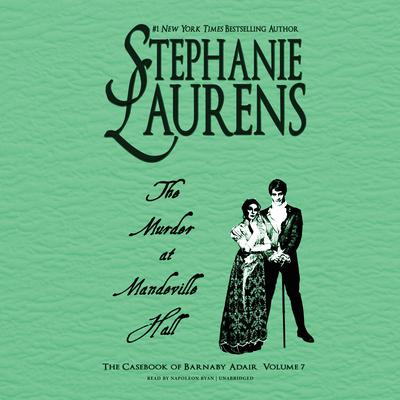 The Murder at Mandeville Hall

#1 New York Times bestselling author Stephanie Laurens brings you a tale of unexpected romance that blossoms against the backdrop of dastardly murder.

On discovering the lifeless body of an innocent ingénue, a peer attending a country house party joins forces with the lady-amazon sent to fetch the victim safely home in a race to expose the murderer before Stokes, assisted by Barnaby and Penelope, is forced to allow the guests, murderer included, to decamp.

Well-born rakehell and head of an ancient family, Alaric, Lord Carradale, has finally acknowledged reality and is preparing to find a bride. But loyalty to his childhood friend, Percy Mandeville, necessitates attending Percy’s annual house party, held at neighboring Mandeville Hall. Yet despite deploying his legendary languid charm, by the second evening of the week-long event, Alaric is bored and restless.

Escaping from the soirée and the Hall, Alaric decides that as soon as he’s free, he’ll hie to London and find the mild-mannered, biddable lady he believes will ensure a peaceful life. But the following morning, on walking through the Mandeville Hall shrubbery on his way to join the other guests, he comes upon the corpse of a young lady-guest.

Constance Whittaker accepts that no gentleman will ever offer for her—she’s too old, too tall, too buxom, too headstrong … too much in myriad ways. Now acting as her grandfather’s agent, she arrives at Mandeville Hall to extricate her young cousin, Glynis, who unwisely accepted an invitation to the reputedly licentious house party.

But Glynis cannot be found.

A search is instituted. Venturing into the shrubbery, Constance discovers an outrageously handsome aristocrat crouched beside Glynis’ lifeless form. Unsurprisingly, Constance leaps to the obvious conclusion.

Luckily, once the gentleman explains that he’d only just arrived, commonsense reasserts itself. More, as matters unfold and she and Carradale have to battle to get Glynis’ death properly investigated, Constance discovers Alaric to be a worthy ally.

Yet even after Inspector Stokes of Scotland Yard arrives and takes charge of the case, along with his consultants, the Honorable Barnaby Adair and his wife, Penelope, the murderer’s identity remains shrouded in mystery, and learning why Glynis was killed—all in the few days before the house party’s guests will insist on leaving—tests the resolve of all concerned. Flung into each other’s company, fiercely independent though Constance is, unsusceptible though Alaric is, neither can deny the connection that grows between them.

Can Alaric unearth the one fact that will point to the murderer before the villain rips from the world the lady Alaric now craves for his own?

Stephanie Laurens, the #1 New York Times bestselling author, began writing as an escape from the dry world of professional science. Her hobby quickly became a career. Her novels set in Regency England have captivated readers around the globe, making her one of the romance world’s most beloved and popular authors. She has been writing historical romance novels in her signature “Errol Flynn meets Jane Austen” style for many years.