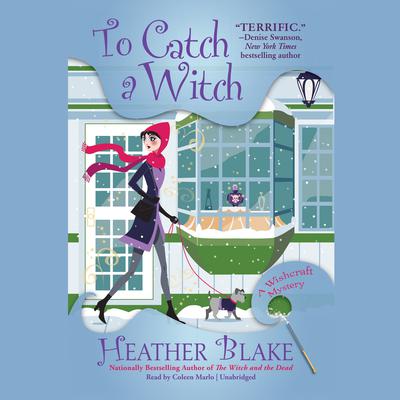 To Catch a Witch: A Wishcraft Mystery

Wishcrafter Darcy Merriweather might be a witch with the ability to grant wishes for others, but wishing isn’t going to help her catch a killer …

When wishcrafter Darcy Merriweather’s personal concierge company is hired by elite runner Abby Stillwell to organize the Wicked Mad Dash, a competition that takes place in the Enchanted Village, Darcy is more than willing to help her friend. As blizzard conditions rage on the morning of the race, Darcy’s main concern is the terrible weather―until Abby goes missing … and is later found dead, buried in the snow.

As Darcy investigates her friend’s untimely death, she learns that she didn’t really know Abby well at all. And those closest to the woman―her secret fiancé, her roommate, her ex-boyfriend, and her coworkers at Balefire Sports―seem to have plenty to hide too. As Darcy digs deeper, she uncovers complicated relationships, a possible embezzlement scheme, and allegations of cheating against a top athlete.

Just when Darcy is convinced she’s hit a dead end in the case, a startling burglary and the hunt for Abby’s elusive ex send Darcy down a dark, dangerous trail. It will take the help from friends, family, and a little bit of magic for Darcy to stop a stone-cold killer from striking again.

“The latest in Blake’s cozy/supernatural series contains enough fighting over in-groups and identities to be read on several levels, making it more prescient than many of its ilk.” —Kirkus Reviews

Heather Blake is a pseudonym of Heather Webber, the bestselling author of more than a dozen novels, including the Nina Quinn Mysteries and the Lucy Valentine books. Blake has been nominated twice for an Agatha Award. She currently lives in the Cincinnati area with her family.