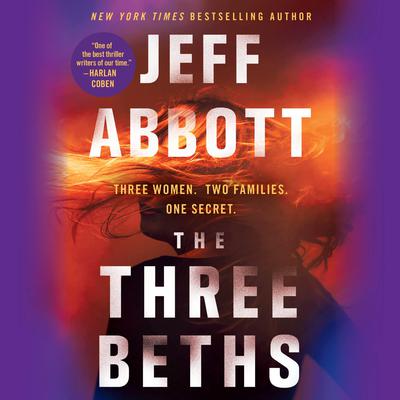 From New York Times bestselling writer Jeff Abbott, a psychologically intense and emotionally gripping new suspense novel about a daughter's desperate search for her missing mother-one that may lead her closer to home than she ever anticipated. My mom would never leave me. This has been Mariah Dunning's motto. Her compass. Her belief. So when she glimpses her mother--who's been missing for the past year--on the other side of a crowded food court, Mariah's conviction becomes stronger than ever. Or is she losing her mind? An unlikely coincidence? When Beth Dunning disappeared without a trace, suspicion for her murder-despite the lack of a body or any physical evidence-immediately fell upon Mariah's father. Until Mariah stumbles upon two other recent disappearances from Lakehaven. And all three women had the same name: Beth. Or a sinister connection? Mariah would give anything to find out what happened to her mother, and clear her father's name. But the truth may be more devastating than she could have imagined... Jeff Abbott once again proves why he's "one of the best thriller writers in the business" (Associated Press) with this twisty new novel. "I could not tear myself away from Jeff Abbott's mesmerizing, gripping, and claustrophobic novel. Blame is the perfect blend of complex characters, plot twists galore, and great psychological suspense. Don't miss it." -- Harlan Coben, #1 New York Times bestselling author, on Blame "Jeff Abbott is a remarkable writer and storyteller, and brings his skills to the realm of psychological suspense with this absolutely captivating book. Emotionally compelling, tense and packed with shocking plot twists, this book makes me have to use a word I hate: Unputdownable. I loved it." -- Alison Gaylin, USA Today bestselling author, on Blame "Blame is a masterful suspense novel, full of dread, lies, and deceptions. Abbott is one of our finest writers, and Blame takes his talents to new levels. Sinister and twisting, this is hands-down the best book you'll read--and re-read--this year. Absolutely top-notch." -- J.T. Ellison, New York Times bestselling author, on Blame

"Like a stage magician, Abbott often seems to be doing one thing when he's actually doing something else, and when we realize what he's been up to, we can't help but shake our heads in admiration."—Booklist —
"Abbott uses his skills as a master storyteller to convey a complicated and ambitious tale that seems straightforward but is full of twists and red herrings. He also keeps the story moving without falling into clichés or over-the-top revelations. The mystery works because of the terrific characters and the beautiful road map he unveils while navigating the reader through a complex landscape. Those who enjoy unpredictable stories can never go wrong diving into the world of Jeff Abbott."—The Washington Post —
Abbott is a master craftsman, an architect, Racehorse Haynes building a case for reasonable doubt, brick by brick. Blame left me shaking my head in admiration for his mad skills. —Lone Star Literary Life
"Abbott expertly weaves an intricate, intense and complex thriller that gets more exciting and addictive as you go along. His twists are chilling and completely unexpected.... I will definitely seek out further reads by this talented writer."—TheMysterySite.com —
"You'd be hard pressed to find a more versatile writer working in the thriller genre right now than Jeff Abbott. Whether it's Mark Greaney--like action thrillers or Harlan Coben--like suspense thrillers, Abbott can do it all, and he does it consistently at a very high level...[and] THE THREE BETHS, frankly, might just be the best thing he's delivered so far."—The Real Book Spy —
Jeff Abbott is one of the most versatile authors in the crime fiction genre, and his broad story-telling talents are on full display in his latest thriller. The deeply psychological Blame has it all-a cast of fully-realized complicated characters with plenty of secrets, and a tightly-wound suspenseful plot with so many twists and turns that you'll never see the ending coming. ...This is one of those books that will keep you up at night-first you won't be able to put it down until way past your bedtime, and then you'll lie awake trying to puzzle out the characters' secrets and the plot's riddles....Rest assured that when you finish his latest, you'll be hooked. —MysteryPeople
Abbott's Blame is every bit as good [as Harlan Coben's Fool Me Once] and packs even more surprises along the way, leading up to a shocking ending that nobody, not even veteran readers of the genre, will ever see coming. Abbott's lightning-quick pacing and constant twists and turns make his latest offering impossible to put down. A one-sit read that'll have readers up way past their bedtimes, Blame is Jeff Abbott's best novel so far-and a strong contender for best psychological thriller of the year. —TheRealBookSpy.com
"Jeff Abbott knows his way around a suspense thriller. Another author would be tempted to shove the myriad puzzle pieces together as fast as possible, thus speeding their way to THE THREE BETHS' shattering conclusion. But Abbott lays out the edge pieces of the puzzle at a deliberate pace, so that when the book is done, every single piece of it fit together, making the overall plot resolution make perfect sense. It's a resolution that stays with you. Because really, there's really no other way for the tragedy to have played out."—Crimespree Magazine —
"In a story with multiple plot lines like this, the pacing is critical and Abbott hits the mark - each part of the story is revealed subtly and at just the right time. That leaves the reader simultaneously wanting to race to the next clue and trying to slow down so as not to miss any important details. And there are just the right amount of twists and turns to keep things lively without going off the rails."—Mystery People —
Jeff Abbott has proven over the last two years that he's able to write suspense just as well as action . . . maybe even better. While his last book, Blame, had a killer twist ending, Abbott tops himself with the final act in The Three Beths, which will leave even veteran readers stunned. —CrimeReads
"Give author Jeff Abbott a chance, and he will twist you into a pretzel half a dozen times with THE THREE BETHS."—BookReporter.com —
"[The] characters and storyline continue to stick with me. Abbott turns the trope of the amnesiac into something far more haunting and tragic...I am picky as hell about psychological suspense but this book is excellent."—The Crime Lady —
"Abbott is a master of misdirection."—Library Journal —
"Readers will be riveted."—Publisher's Weekly —
"THE THREE BETHS effectively keeps the reader off-kilter...Abbott invests Mariah with resilience and a fervent desire to find her mother that keeps the reader on her side. Abbott's breathless pacing and surprising twists lead "The Three Beths" to a stunning finale."—SouthFlorida.com —
Not only is Jeff Abbott's Blame the most addictive thriller of the summer, it also happens to be an astute study of the corrosive nature of blame and the destructive power of its sibling emotion, guilt....With domestic suspense, pacing is so important and Abbott really hits the sweet spot here. This book belongs on that short list of novels that demand to be read in one sitting. When your boss asks why you are late for work, blame Jeff Abbott - because he is no doubt culpable of keeping you up all night with this winning thriller...This is a novel that will live on in reader's minds for a very long time to come. —BOLO Books
"No one tells a story steeped in secrets better than Abbott. His mastery of connecting the threads between characters and the timing of revealing their hidden deeds or thoughts is perfection...THE THREE BETHS will grab you and surprise you and make you want to read more."—Reading Room —