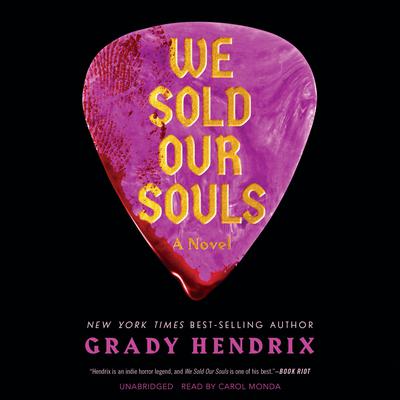 We Sold Our Souls

Finalist for the 2018 Shirley Jackson Award for Best Novel

Finalist for the 2019 Dragon Award for Best Horror Novel

Finalist for the 2018 Goodreads Choice Awards

An i09 Pick of the New Sci-Fi and Fantasy Books

A Booklist Pick of Best New Books of the Week

In this hard-rocking, spine-tingling supernatural thriller, the washed-up guitarist of a ’90s heavy metal band embarks on an epic road trip across America and deep into the web of a sinister conspiracy.

Grady Hendrix, horror writer and author of Paperbacks from Hell and My Best Friend’s Exorcism, is back with his most electrifying novel yet. In the 1990s, heavy metal band Dürt Würk was poised for breakout success—but then lead singer Terry Hunt embarked on a solo career and rocketed to stardom as Koffin, leaving his fellow bandmates to rot in obscurity.

Two decades later, former guitarist Kris Pulaski works as the night manager of a Best Western—she’s tired, broke, and unhappy. Everything changes when a shocking act of violence turns her life upside down, and she begins to suspect that Terry sabotaged more than just the band.

Kris hits the road, hoping to reunite with the rest of her bandmates and confront the man who ruined her life. It’s a journey that will take her from the Pennsylvania rust belt to a celebrity rehab center to a music festival from hell. A furious power ballad about never giving up, even in the face of overwhelming odds, We Sold Our Souls is an epic journey into the heart of a conspiracy-crazed, pill-popping, paranoid country that seems to have lost its very soul … where only a lone girl with a guitar can save us all.

“Funny and intense.” — Salt Lake Tribune (Utah)
“A faithful power ballad to horror literature in all of its forms.” —Paste magazine
“We Sold Our Souls explores heavy metal, its fantasy allegories, and the horrors those allegories reveal…It addresses the inauthenticity and carefully crafted emotional landscape of ‘sellout’ artists, and the underbelly of a violent America. It’s about Black Iron Mountain and soul-sucking corpse beasties. It’s rad.” —Los Angeles Review of Books
“Horror and humor play off each other in a delicate dance.” —Nightmare Magazine
“Mixes horror with pop culture.” —Bustle
“An energetic Faustian tale…This is a fast-paced ride, firmly rooted in the pulp-horror tradition but with thought-provoking social criticism and a sense of fear that rises from the terrifying implication that we are all willing to sell our souls…Will leave readers begging for an encore.” —Booklist (starred review)
“A gloriously over-the-top scare fest that has hidden depths…Hendrix scatters plenty of barbed popular and consumer culture references throughout…Readers will root for Kris all the way to the explosive, poignant finale.” —Publishers Weekly
“Hendrix’s remarkable, immersive prose will have readers recognizing pieces of themselves in the characters’ flawed thoughts and actions.” —Library Journal
“Narrator Carol Monda is a perfect fit for this story of heavy metal, revenge, and redemption. Monda’s voice is gravelly and whiskey tinged as she grinds out the feelings and frustrations of Kris Pulaski, the washed-up former guitarist of Durt Wurk…This audio production is highly stylized, matching the novel’s quirky writing and tendency to riff in long passages of imagery. Monda’s growling monotone will not be to everyone’s taste, but it really sells the story’s attitude.” —AudioFile

Grady Hendrix is a novelist and screenwriter based in New York City whose novels have won wide acclaim. Horrorstör was named one of the best books of 2014 by National Public Radio, and Paperbacks from Hell won the Bram Stoker Award.