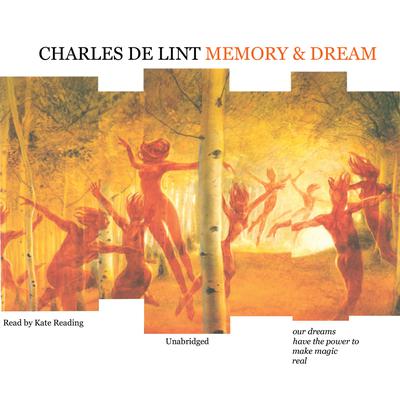 Isabelle Copley, as the young student of the cruel, brilliant artist Vincent Rushkin, discovered that she could paint images so vividly real that they brought her wildest fantasies to life, freeing ancient spirits. But when the forces she unleashed brought tragedy to those she loved, she turned her back on her talent and her dreams.

Now, twenty years later, Isabelle must come to terms with the shattering memories she has long denied and unlock the slumbering power of her brush. And, in a dark reckoning with her old master, she must find the courage to live out her dreams and bring the magic back to life.

This is a tale of love, courage, and the transforming power of imagination.

“Beautifully evokes a sense of creative community, making it almost possible to believe that the rarified aesthetic atmosphere might well be capable of conjuring up a spirit or two.” —Publishers Weekly
“Easily Canada’s top fantasy scribe…a major international force in the genre. Here is a biped who has steadfastly avoided stereotyping in his work from the beginning…de Lint has developed a considerable talent for injecting magic into everyday contemporary life.” —Edmonton Journal
“Using the colorful, mythical North American city of Newford as his background, de Lint draws up a rich tapestry of myth and magic, using painting—and, on a deeper level, creation—as a metaphor throughout the book.” —Green Man Review
“De Lint takes a hard look at reality in Memory and Dream, especially at the personal burdens we all carry. He seamlessly blends urban landscapes, with all their sometimes ugly complications, with a magic that feels so true it's hard not to believe he knows something the rest of us don't.” —Quill & Quire
“Moves gracefully through the borders between reality and imagination, weaving a powerful tale about the relationship between an artist and her work. A strong addition to fantasy collections.” —Library Journal
“It is hard to imagine urban fantasy done better than it is by de Lint at his best, and this book shows his imagination and craft at their highest levels. De Lint's folkloric scholarship is as outstanding as ever; he never lets it slide into academicism or pretension…Memory and Dream deserves the highest recommendation and the widest readership.” —Booklist
“A soulful journey into art, friendship, and love…Kate Reading tackles the shifting story and lyrical prose with a tenderness that brings the characters to life…The stories are all linked, and each one is given a distinctive voice through the modulating tones of Reading’s narration.” —AudioFile