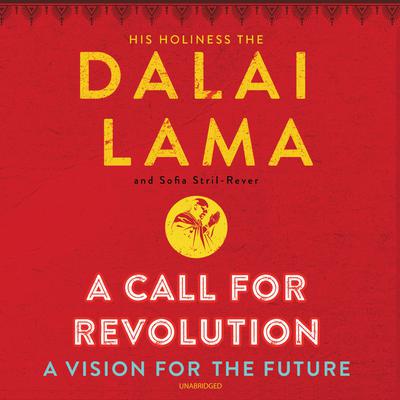 A Call for Revolution: A Vision for the Future

By His Holiness the Dalai Lama , with Sofia Stril-Rever
Read by Edoardo Ballerini

A Library Journal Best Book of the Year

A RALLYING CRY FOR THE WHOLE WORLD, BY ONE OF THE MOST RESPECTED LEADERS OF OUR TROUBLED TIMES.

This eloquent, impassioned manifesto is possibly the most important message The Dalai Lama can give us about the future of our world. It's his rallying cry, full of solutions for our chaotic, aggressive, divided times: no less than a call for revolution.

Are we ready to hear it?

Are we ready to act?

“Powerful…Packed with wise advice and perceptive observations.” —Parade
“Impassioned… An excellent introduction for those unfamiliar with the Dalai Lama’s simple-seeming teachings for improving a complex, globally interconnected world.” —Publishers Weekly (starred review)
“Fascinating.…A global leader encourages young people to revel in the cause of peace.” —Booklist
“Like the Dalai Lama himself, Edoardo Ballerini’s narration has a gentle steadiness that imparts a sense of quiet conviction and optimism. As His Holiness describes the trials he himself has faced and those he sees in the world today, Ballerini’s narration captures his wisdom and peacefulness in the face of adversity. In these contentious times of hate-mongering rhetoric, armed conflict, and climate change, the Dalai Lama remains a comforting voice calling for the fostering of peace and dialogue.” —AudioFile

Sofia Stril-Rever is a Sanskrit expert and an interpreter for the Dalai Lama. She received training from a traditional Indian pandit and a Tibetan lama in the monastery of Kirti (Dharamsala). She translated and published a collection titled Kalachakra Buddhist Scriptures and cofounded the website BuddhaLine.net.