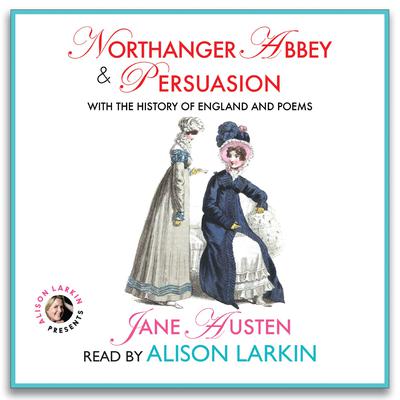 Northanger Abbey & Persuasion, with The History of England & Poems

Award-winning narrator and internationally acclaimed writer/comedienne Alison Larkin brings depth and wit to this rich, hugely entertaining audio production of Jane Austen’s last two great novels, Northanger Abbey and Persuasion. The novels are followed by The History of England, a short satirical piece in which the teenage Austen writes about the kings and queens of England with less respect (and more wit) than any British newspaper, and Poems, a selection of lesser known, mostly comic verses that Austen wrote to entertain family and friends.

“Alison Larkin’s narration will captivate listeners from the first sentence. Her delicate voice and perfect English accent sweep the listener back in time, right into the lives of the characters…Austen’s poems are astute and whimsical, and Larkin’s voice echoes the author’s artistry.” —AudioFile
“This is a particularly enjoyable rendition of [Northanger Abbey], because Larkin understands that Austen was sending up Gothic novels and never lets the parody out of earshot.” —Christian Science Monitor