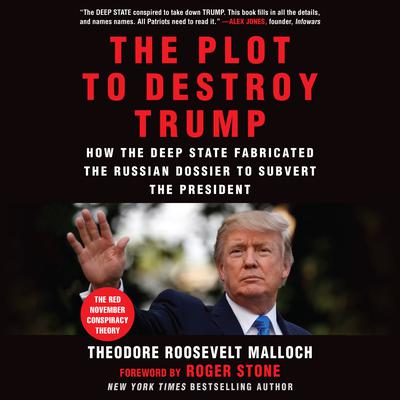 The Plot to Destroy Trump: How the Deep State Fabricated the Russian Dossier to Subvert the President

“The DEEP STATE conspired to take down TRUMP. This book fills in all the details, and names names. All Patriots need to read it.” ―Alex Jones, founder, Infowars

The Plot to Destroy Trump exposes the deep state conspiracy to discredit and even depose the legitimately elected President Donald J. Trump with the fabricated Russian dossier, including:

How does all this tie together? And what does it mean for Trump’s presidency and American democracy? Ted Malloch names the players, connects the dots, and explains who was behind the plot to create a red November. With a foreword by New York Times bestseller and Trump confidant Roger Stone, The Plot to Destroy Trump uncovers the biggest political scandal since Watergate.

Theodore Malloch is chairman and CEO of the Roosevelt Group, a strategy firm, and research professor at Yale University, where he heads the Spiritual Capital Initiative. He was vice president for all national programs for the Aspen Institute and served on the Executive Board of the World Economic Forum. He has held an ambassadorial-level position at the United Nations and senior policy positions at the US Senate Committee on Foreign Relations and the US Department of State.