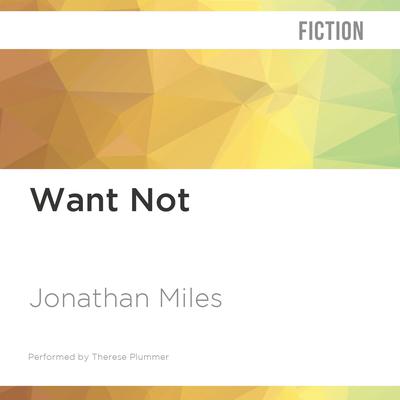 A compulsively listenable, deeply human novel that examines our most basic and unquenchable emotion: want.

Now, in his much-anticipated second novel, Want Not, Miles takes a giant leap forward with this highly inventive and corrosively funny story of our times, a three-pronged tale of human excess that sifts through the detritus of several disparate lives—lost loves, blown chances, countless words, and deeds misdirected or misunderstood—all conjoined in their come-hell-or-high-water search for fulfillment.

As the novel opens on Thanksgiving Day, listeners are telescoped into three different worlds in various states of disrepair—a young freegan couple living off the grid in New York City; a once-prominent linguist, sacked at midlife by the dissolution of his marriage and his father’s losing battle with Alzheimer’s; and a self-made debt-collecting magnate, whose brute talent for squeezing money out of unlikely places has yielded him a royal existence, trophy wife included.

Want and desire propel these characters forward toward something, anything, more, until their worlds collide, briefly, randomly, yet irrevocably, in a shattering ending that will haunt listeners long after the last lines.

With a satirist’s eye and a romantic’s heart, Miles captures the morass and comedy of contemporary life in all its excess. Bold, unblinking, unforgettable in its irony and pathos, Want Not is a wicked, big-hearted literary novel that confirms the arrival of a major voice in American fiction.

Jonathan Miles is the author of Dear American Airlines, Want Not, and Anatomy of a Miracle. A former columnist for the New York Times, he is a contributing editor to such magazines as Details, Garden & Gun, Men’s Journal, and Field & Stream. His work is frequently anthologized in Best American Sports Writing and Best American Crime Writing. A former longtime resident of Oxford, Mississippi, he currently lives along the Delaware River in rural New Jersey.