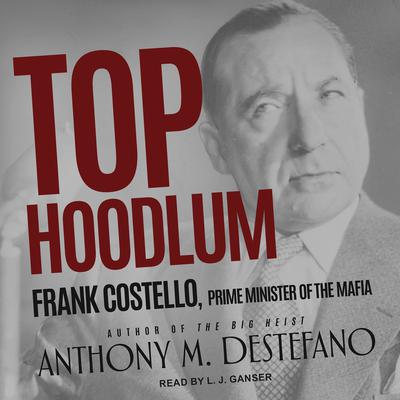 The press nicknamed him "The Prime Minister of the Underworld." The U.S. Treasury's Bureau of Narcotics described him as "one of the most powerful and influential Mafia leaders in the U.S." But to friends and associates, he was simply "Uncle Frank." Who was Frank Costello really? That's the question Pulitzer Prize–winning reporter Anthony M. DeStefano sets out to answer—in this definitive portrait of one of the most fascinating figures in the annals of American crime . . .

Using newly released FBI files, eyewitness accounts, and family mementos, Top Hoodlum takes you inside the Mafia that Frank Costello helped build from the ground up, from small-time bootlegging and gambling to a nationwide racketeering empire.

Sometimes shocking, sometimes amusing, and always riveting, these are the stories that have inspired American crime classics like The Godfather, Casino, Goodfellas, and The Sopranos. This is the man who made the Mafia such a powerful force in our nation's history. This is Top Hoodlum.

Anthony M. DeStefano has been a reporter for the past twenty years for Newsday in New York City, specializing in criminal justice and legal affairs. He is the author of The Last Godfather, King of the Godfathers, Mob Killer, The War on Human Trafficking, and Gangland New York, among others. He has appeared on Biography Channel programs as an expert on organized crime and also speaks at academic conferences about crime and human trafficking.