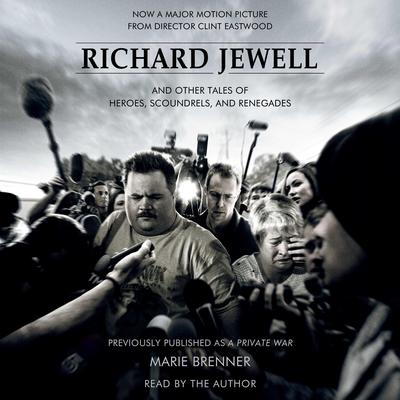 A Private War: Marie Colvin and Other Tales of Heroes, Scoundrels, and Renegades

This collection of captivating profiles from Vanity Fair writer Marie Brenner spans her award-winning career and features larger-than-life figures such as Donald Trump, Roy Cohn, Malala Yousafzai, and Richard Jewell—the security guard whose dramatic heroism at the bombing of the 1996 Olympics made him the FBI’s prime suspect.

Previously published as A Private War, Marie Brenner’s Richard Jewell tells a gripping true story of heroism and injustice. In the early morning hours of July 27, 1996, three pipe bombs exploded at the Summer Olympics in Atlanta, Georgia, killing one person and injuring 111 others. Hundreds more potential casualties were prevented by the vigilance and quick actions of security guard Richard Jewell, who uncovered the bombs and began evacuating the area. But no good deed goes unpunished.

Desperate for a lead, investigators and journalists pursued Jewell as a potential suspect in the case, painting him as an obvious match for the infamous “lone bomber” profile. Accused of being a terrorist and a failed law enforcement officer who craved public recognition for his false heroics, he saw his reputation smeared across headlines and broadcasts nationwide. After a months-long investigation found no evidence against him, the US Attorney finally cleared Jewell’s name. Yet Jewell would not be fully exonerated in the eyes of the public until the actual bomber confessed in 2005, just two years before Jewell’s premature death at the age of forty-four.

Marie Brenner is an author and writer-at-large for Vanity Fair. She has published five books, including Great Dames: What I Learned from Older Women and the bestselling House of Dreams, The Bingham Family of Louisville. She joined the staff of Vanity Fair in 1985; she has also been a contributing editor for New York magazine and the New Yorker, and has contributed articles to the New York Times Magazine and Vogue. She is the winner of six Front Page awards for her journalism and the Frank Luther Mott Kappa Tau Alpha Award for research. Her 2003 investigation of the rise of anti-Semitism in France (“France’s Scarlet Letter”) made international news. Her expose of the tobacco industry, “The Man Who Knew Too Much,” was the basis for the 1999 movie The Insider, which was nominated for seven Academy Awards, including Best Picture. Her article “Erotomania” became the Lifetime movie Obsessed. She lives in New York City.