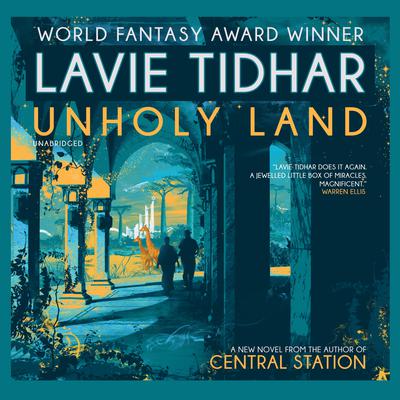 A Publishers Weekly Best Book of 2018 in Science Fiction

A Verge Pick of New SF/F Books to Check Out

The author of the critically acclaimed, Campbell Award–winning Central Station returns with a subversive new novel evoking The Yiddish Policemen’s Union and The City and the City.

When pulp-fiction writer Lior Tirosh returns to his homeland in East Africa, much has changed. Palestina―a Jewish state established in the early 20th century―is constructing a massive border wall to keep out African refugees. Unrest in the capital, Ararat, is at fever pitch.

While searching for his missing niece, Tirosh begins to act as though he is a detective from one of his own novels. He is pursued by ruthless members of the state’s security apparatus while unearthing deadly conspiracies and impossible realities. For if it is possible for more than one Palestina to exist, the barriers between the worlds are beginning to break.

“Tidhar will leave readers’ heads spinning with this disorienting and gripping alternate history…Readers of all kinds, and particularly fans of detective stories and puzzles, will enjoy grappling with the numerous questions raised by this stellar work.” —Publishers Weekly (starred review)
“Unholy Land is a wonder and a revelation―a work of science fiction capable of enthralling audiences across the multiverse.” —Foreword (starred review)
“Adventurous readers will appreciate this well-written and ambitious book. It should find a place at any library that offers high-quality literary fiction.” —Booklist
“Lavie Tidhar does it again. A jeweled little box of miracles. Magnificent.” —Warren Ellis, author of Gun Machine
“Will leave you dazzled and delighted.” —Ian McDonald, author of Time Was

Lavie Tidhar is the World Fantasy Award–winning author of Osama, in addition to many other works. He works across genres, combining detective and thriller modes with poetry, science fiction, and historical and autobiographical material. His work has been compared to that of Philip K. Dick by the London Guardian and the Financial Times.