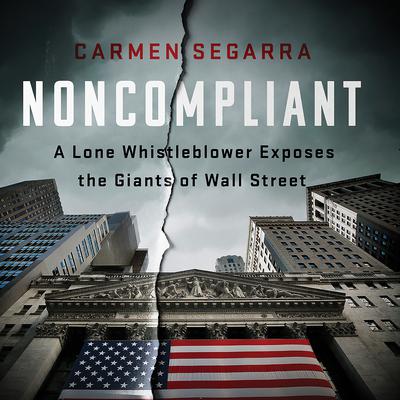 Noncompliant: A Lone Whistleblower Exposes the Giants of Wall Street

A first-hand account of corruption and cover-up at Goldman Sachs from the Federal Reserve examiner who refused to be silenced.


In 2011, Carmen Segarra took a job as a regulator at Goldman Sachs on behalf of the NY Fed. It was an opportunity, she believed, to monitor the big bank's behavior in order to avoid another financial crisis.

Shocked to discover that Goldman did not have a conflict of interest policy, she immediately issued a report. But her superiors pressured her to modify the report, covering up her discovery. It was then that she realized the full extent of the collusion between Goldman and the Fed and began to record meetings and conversations with her superiors. When she refused to change her report, Segarra was dismissed from her job. Shortly thereafter she released her audio recordings, exposing the Fed's inefficiency in holding the bank accountable.

In this hard-hitting exposé, Segarra chronicles her experience blowing open the doors on the macro-level corruption, ineffectiveness, and illegal behavior of the big banks and the government bodies set up to regulate them. From the moment she became a whistleblower, countless employees of regulatory bodies and banks have come to Segarra to share testimonies of cover-ups they have witnessed. In Noncompliant, she reveals how common these practices are, and shows how the culture of corruption that is not only accepted but encouraged in these companies filters down to the individual employees. In the process of unraveling these connections, she explains to readers how, ultimately, this systemic corruption affects us all.

Carmen Segarra After her dismissal from the FRBNY, Segarra released audio recordings exposing the Fed's inefficiency in holding the bank accountable. Some of the recordings were featured in a joint ProPublica and This American Life piece (released on Sept 26, 2014). Formerly the National Policy and Outreach Chair at the Hispanic National Bar Association, Segarra now works as an advocate for regulatory transparency and reform. She lives in New York.