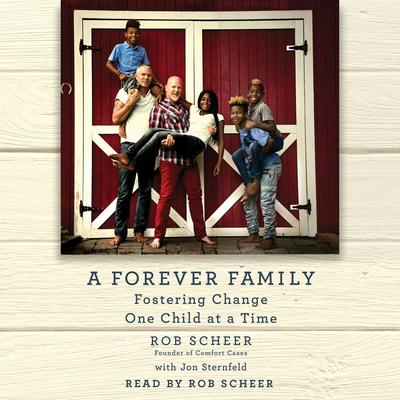 A Forever Family: Fostering Change One Child at a Time

In the tradition of The Promise of a Pencil and Kisses from Katie comes an inspirational memoir by the founder of Comfort Cases about his turbulent childhood in the foster care system and the countless obstacles and discrimination he endured in adopting his four children.

Rob Scheer never thought that he would be living the life he is now. He’s happily married to his partner and love of his life, he’s the father of four beautiful children, and he’s the founder of an organization that makes life better for thousands of children in the foster care system.

Growing up in an abusive household before his placement in foster care, Rob had all the odds stacked against him. Kicked out of his foster family’s home within weeks after turning eighteen—with a year left of high school to go—he had to resort to sleeping in his car and in public bathrooms. He suffered from drug addiction and battled with depression, never knowing when his next meal would be or where he would sleep at night. But by true perseverance, he was able to find his own path and achieve his wildest dreams.

Poignant, gripping and inspiring, Rob’s story provides a glimpse into what it’s like to grow up in the foster care system, and sheds necessary light on the children who are often treated without dignity. Both a timely call to action and a courageous and candid account of life in the foster care system, A Forever Family ultimately leaves you with one message: one person can make a difference.

Robert Scheer is the editor-in-chief of the Webby Award–winning online magazine Truthdig, professor at the University of Southern California’s Annenberg School for Communication and Journalism, and co-host of Left, Right & Center, a weekly syndicated radio show broadcast from NPR’s west coast affiliate, KCRW. In the 1960s, he was editor of the groundbreaking Ramparts magazine and later was national correspondent and columnist for the Los Angeles Times. He is the author of nine books, including The Great American Stickup.

Rob Scheer is the founder of Comfort Cases, a charity whose mission is to inspire communities to bring dignity and hope to the nearly 437,500 youth in foster care in the United States. He lives with his husband and children in Maryland.