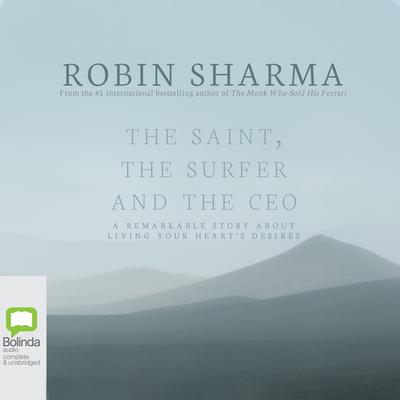 The Saint, the Surfer and the CEO: A Remarkable Story About Living Your Heart's Desires

‘Release any concerns that you have about this path you’re about to walk on....’

Jack Valentine seemed to have it all. He made good money as an adman, and looked good doing it. He had a hot apartment, cool friends, even a slick car – at least until the hectic Monday morning a truck smashed into it, sending the critically injured Jack to the hospital.

Everything happens for a reason, though, and Jack’s reason reveals itself in the silverhaired cancer patient who becomes his roommate one evening. The elderly man, Cal, shares his life story – one not dissimilar to Jack’s – of material wealth masking a gaping hole within. Cal ultimately found salvation through philosophy (‘the love of wisdom’), and now offers to help Jack by prepping the younger man for the Final Questions we all must face: Have I lived wisely? Have I loved well? Have I served greatly?

Presenting Jack with three plane tickets, each accompanied by a map marked with a red X, Cal sends Jack to meet with three great teachers, each of whom will help Jack answer one of the Final Questions – just as they once helped Cal. First, in Rome, Jack will meet ‘the Saint’. Then a haunted beach in Hawaii introduces him to ‘the Surfer’. And finally the grandeur of New York City sets the stage for his last encounter: with ‘the CEO’.

Robin Sharma is one of the world’s most highly respected leadership experts. He is devoted to helping organizations develop people who “lead without a title” so that they win in this period of intense change. His clients include Microsoft, GE, FedEx, IBM, Nike, NASA, Yale University, and the Young Presidents Organization. His books, such as The Monk Who Sold His Ferrari and The Greatness Guide, have topped bestseller lists across the globe and have sold millions of copies in more than seventy languages. They have been embraced by rock stars, royalty, and many celebrity CEOs. Sharma is also the cofounder of 960vets.com, an innovative online support resource that helps US veterans successfully reintegrate into civilian life.