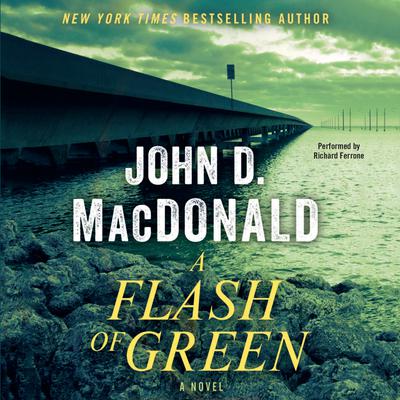 A Flash of Green: A Novel

A classic novel by John D. MacDonald with an exclusive introduction written and read by Dean Koontz.

A Flash of Green tells the gripping story of small-town corruption and two people brave enough to fight back, featuring many of the themes John D. MacDonald explored better than anyone in his legendary career as a leading crime novelist. The opportunists have taken over Palm City. Silent and deadly, like the snakes that infest the nearby swamps, they lay hidden from view, waiting for the right moment to strike. Political subterfuge has already eased the residents toward selling out. All that’s left now is to silence a few stubborn holdouts.

James Wing is only trying to help a friend’s widow. At least that’s what he tells himself after warning Kat Hubble that the beautiful bay she and her neighbors have struggled to save is going to be sold to developers. He knows that he shouldn’t have told her anything. He’s a reporter, trained to reveal nothing. But he’s falling in love with her. Now cutthroats have set their sights on Kat—and they’ll do anything, use anyone, to stop her from interfering in their plans.

John Dann MacDonald was an American writer of novels and short stories, known for his thrillers. He was a prolific author of crime and suspense novels, many of them set in his adopted home of Florida. His best-known works include the popular and critically acclaimed Travis McGee series, and his novel The Executioners, which was filmed twice as Cape Fear. In 1972, MacDonald was named a grandmaster of the Mystery Writers of America, and he won a 1980 U.S. National Book Award in the one-year category Mystery.