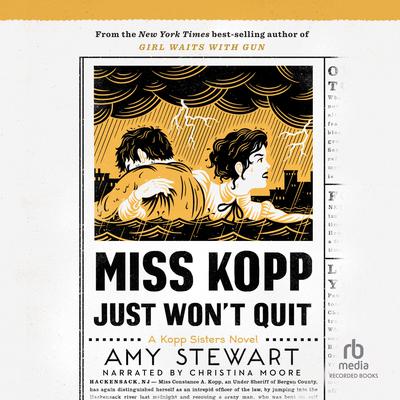 Trailblazing Constance's hard-won job as deputy sheriff is on the line in Miss Kopp Just Won't Quit, the fourth installment of Amy Stewart's Kopp Sisters series. After a year on the job, New Jersey's first female deputy sheriff has collared criminals, demanded justice for wronged women, and gained notoriety nationwide for her exploits. But on one stormy night, everything falls apart. While transporting a woman to an insane asylum, Deputy Kopp discovers something deeply troubling about her story. Before she can investigate, another inmate bound for the asylum breaks free and tries to escape. In both cases, Constance runs instinctively toward justice. But the fall of 1916 is a high-stakes election year, and any move she makes could jeopardize Sheriff Heath's future-and her own. Although Constance is not on the ballot, her controversial career makes her the target of political attacks. With wit and verve, book-club favorite Amy Stewart brilliantly conjures the life and times of the real Constance Kopp to give us this "unforgettable, not-to-be messed-with heroine" (Marie Claire) under fire in Miss Kopp Just Won't Quit.

“Constance may just have turned forty, but this tough-minded, generous-hearted believer in second chances and equal rights for women looks set for many more adventures…[a] series always fresh, thanks to its vividly imagined characters firmly grounded in historical fact.” —Kirkus Reviews (starred review)
“Narrator Christina Moore portrays Constance as a no-nonsense deputy who doesn’t ask for any favors but expects to be treated as the professional law officer she is…Moore has a host of characters she brings to life.” —AudioFile
“Stewart skillfully builds nail-biting suspense…The blend of practicality, forthrightness, and compassion in her first-person narration is sure to satisfy series fans and win new admirers.” —Publishers Weekly
“Constance herself—a tall, plain woman with a ‘man’s job’—continues to drive the series with a no-nonsense personality that evokes a mix of Laurie R. King’s Mary Russell and Lawrence H. Levy’s Mary Handley.” —Booklist