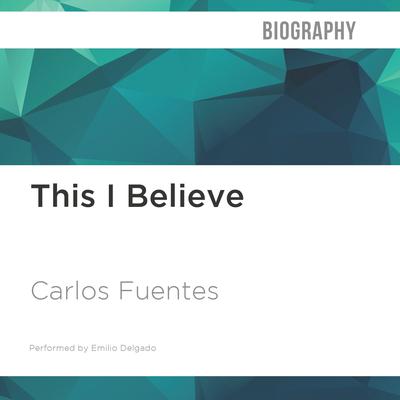 This I Believe: An A to Z of a Life

In this masterly, deeply personal, and provocative audiobook, the internationally renowned Mexican writer Carlos Fuentes, whose work has been called 'a combination of Poe, Baudelaire, and Isak Dinesen' (Newsweek), steps back to survey the wellsprings of art and ideology, the events that have shaped our time, and his extraordinary life and fiercest passions. Arranged alphabetically from 'Amore' to 'Zurich,' This I Believe takes us on a marvelous inner journey with a great writer. Fuentes ranges wide, from contradictions inherent in Latin American culture and politics to his long friendship with director Luis Buuel. Along the way, we find reflection on the mixed curse and blessing of globalization; memories of a sexual initiation in Zurich; a fond tracing of a family tree heavy with poets, dreamers, and diplomats; evocations of the streets, cafes, and bedrooms of Washington, Paris, Santiago de Chile, Cambridge, Oaxaca, and New York; and a celebration of literary heroes including Balzac, Cervantes, Faulkner, Kafka, and Shakespeare. Throughout, Fuentes captivates with the power of his intellect and his prose. Here, too, are vivid, often heartbreaking glimpses into his personal life. 'Silvia' is a powerful love letter to his beloved wife. In 'Children,' Fuentes recalls the births of his daughters and the tragic death of his son; in 'Cinema' he relives the magic of films such as Citizen Kane and The Wizard of Oz. Further extending his reach, he examines the collision between history and contemporary life in 'Civil Society,' 'Left,' and 'Revolution.' And he poignantly addresses the experiences we all hold in common as he grapples with beauty, death, freedom, God, and sex. By turns provocative and intimate, partisan and universal, this audiobook is a brilliant summation of an international literary career.

Carlos Fuentes (1928-2012) was one of the most influential and celebrated voices in Latin American literature. He was the author of twenty-four novels as well as numerous plays, short stories, and essays. He received the 1987 Cervantes Prize, the Spanish-speaking world’s highest literary honor. He was born in Panama City, the son of Mexican parents, and moved to Mexico as a teenager. He served as an ambassador to England and France and taught at universities including Harvard, Princeton, Brown and Columbia.