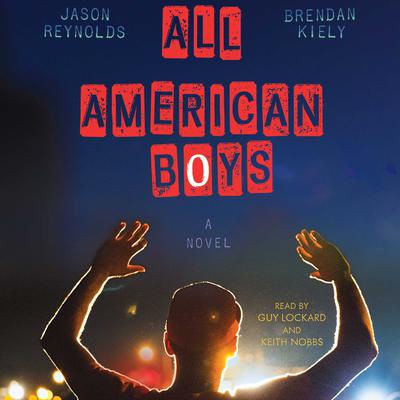 In an unforgettable new novel from award-winning authors Jason Reynolds and Brendan Kiely, two teens—one black, one white—grapple with the repercussions of a single violent act that leaves their school, their community, and, ultimately, the country bitterly divided by racial tension.

A bag of chips. That’s all sixteen-year-old Rashad is looking for at the corner bodega. What he finds instead is a fist-happy cop, Paul Galluzzo, who mistakes Rashad for a shoplifter, mistakes Rashad’s pleadings that he’s stolen nothing for belligerence, mistakes Rashad’s resistance to leave the bodega as resisting arrest, mistakes Rashad’s every flinch at every punch the cop throws as further resistance and refusal to STAY STILL as ordered. But how can you stay still when someone is pounding your face into the concrete pavement?

But there were witnesses: Quinn Collins—a varsity basketball player and Rashad’s classmate who has been raised by Paul since his own father died in Afghanistan—and a video camera. Soon the beating is all over the news and Paul is getting threatened with accusations of prejudice and racial brutality. Quinn refuses to believe that the man who has basically been his savior could possibly be guilty. But then Rashad is absent. And absent again. And again. And the basketball team—half of whom are Rashad’s best friends—start to take sides. As does the school. And the town. Simmering tensions threaten to explode as Rashad and Quinn are forced to face decisions and consequences they had never considered before.

Written in tandem by two award-winning authors, this tour de force shares the alternating perspectives of Rashad and Quinn as the complications from that single violent moment, the type taken from the headlines, unfold and reverberate to highlight an unwelcome truth.

“An intriguing insider-outsider look at an instance of police brutality…a book to be grappled with, challenged by, and discussed. All American Boys represents one voice—even better, two voices—in a national conversation that must continue beyond its pages.” —New York Times Book Review
“The scenario that Reynolds and Kiely depict has become a recurrent feature of news reports, and a book that lets readers think it through outside of the roiling emotions of a real-life event is both welcome and necessary.” —Publishers Weekly (starred review)
“Timely and powerful, this novel promises to have an impact long after the pages stop turning.” —School Library Journal (starred review)
“This hard-edged, ripped-from-the-headlines book is more than a problem novel; it’s a carefully plotted, psychologically acute, character-driven work of fiction that dramatizes an all-too-frequent occurrence. Police brutality and race relations in America are issues that demand debate and discussion, which his superb book powerfully enables.” —Booklist (starred review)
“Two talented narrators portray the alternate realities of two teenagers involved in a complex situation…Narrator Guy Lockhard shifts briskly between Rashad’s tormented thoughts and the intrusions of the well-meaning people…Keith Nobbs portrays the anguish of Quinn…[and] conveys Quinn’s emotional journey from wanting to hide his knowledge about what happened to finding the courage to speak….Winner of the AudioFile Earphones Award.” —AudioFile
“In a series of set pieces, Rashad contemplates his unwanted role as the latest statistic, and Quinn decides whether he’ll walk away or stand. Reynolds and Kiely supply their protagonists with a supporting cast that prods them in all the right ways; Rashad’s strict, ex-cop dad provides unexpected complexity. If the hands and agenda of the authors are evident, their passion elevates the novel beyond a needed call to action to a deeply moving experience.” —Kirkus Reviews

Brendan Kiely received his MFA from the City College of New York. His debut novel, The Gospel of Winter, has been published in eight languages, was selected as one of the American Library Association’s Top Ten Best Fiction for Young Adults 2015, and was a Kirkus Reviews selection for the Best of 2014. Originally from the Boston area, he now lives with his wife in Greenwich Village.