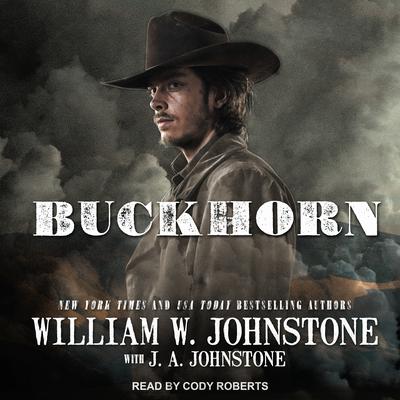 The masters of American frontier storytelling return with the saga of a bold, fearless western legend. When you're a gun for hire, the difference between right and wrong is settled with a bullet . . .

Crater City, New Mexico, is a bustling mining town brimming with the stench of men hungry to get rich the old fashioned way—by killing the competition. Dennis Conroy is the owner of the biggest saloon in town, and he needs a few good sharpshooters to help protect surveyors laying out a route for a spur line before his rival Hugh Thornton beats him to it. Joe Buckhorn's handy with a gun so he takes the job. Against his best advice, he'll also take a liking to the boss's daughter, which doesn't go over well with her father. Worse, Buckhorn starts wondering exactly what kind of man he's working for. Before the sun goes down, much blood will be spilled and a lot of men will be blasted into the middle of next week.

Joe Buckhorn aims to be sure he's not one of them.