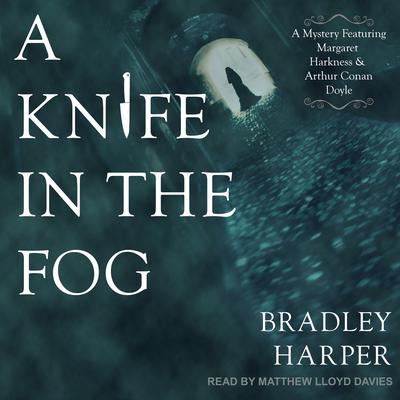 A Knife in the Fog: A Mystery Featuring Margaret Harkness and Arthur Conan Doyle

September 1888. A twenty-nine-year-old Arthur Conan Doyle practices medicine by day and writes at night. His first Sherlock Holmes story, A Study in Scarlet, although gaining critical and popular success, has only netted him twenty-five pounds. Embittered by the experience, he vows never to write another "crime story." Then a messenger arrives with a mysterious summons from former Prime Minister William Gladstone, asking him to come to London immediately.

Once there, he is offered one month's employment to assist the Metropolitan Police as a "consultant" in their hunt for the serial killer soon to be known as Jack the Ripper. Doyle agrees on the stipulation his old professor of surgery, Professor Joseph Bell—Doyle's inspiration for Sherlock Holmes—agrees to work with him. Bell agrees, and soon the two are joined by Miss Margaret Harkness, an author residing in the East End who knows how to use a Derringer and serves as their guide and companion.

Pursuing leads through the dank alleys and courtyards of Whitechapel, they come upon the body of a savagely murdered fifth victim. Soon it becomes clear that the hunters have become the hunted when a knife-wielding figure approaches.

Holmes fans have a treat in store, thanks to Harper's original story and Davies's superb performance. —AudioFile
“Ardent feminism and cerebral detection face down the Ripper in the fog-shrouded streets of London: a feast for lovers of historical crime.” —Laurie R. King, New York Times bestselling author
“Delivers suspense, action, and an utterly unexpected reveal. But Harper’s work stands apart, both for its nuanced, sympathetic portraits of the victims and for its informed medical and forensic detail—the latter gleaned from the author’s career as a pathologist…A deftly paced, expertly plotted work that transcends genre.” —Mary Roach, New York Times bestselling author
“The intricately plotted story is worthy of Conan Doyle himself, with language and characters reminiscent of the Holmes canon and foreshadowing of the author’s future work.” —Library Journal (starred review)
“Matthew Lloyd Davies provides an expert narration of Bradley Harper’s first outing in an exciting new series…Davies portrays everyone from the posh to the poverty-stricken with assurance and credibility. His nuanced delivery highlights class prejudices and misconceptions. Holmes fans have a treat in store, thanks to Harper’s original story and Davies’ superb performance. Winner of the AudioFile Earphones Award.” —AudioFile
“Delightful chemistry, plummy prose, and believable period detail lift Harper’s debut above the throng of forgettable Baker Street imitators.” —Kirkus Reviews
“Holmes’ fans will appreciate the glimpses, amid the action and the examination of social mores, of the elements that formed their hero.” —Booklist