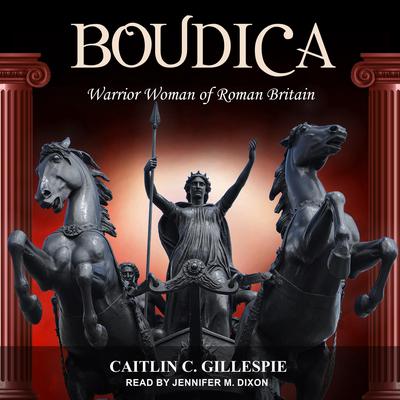 In AD 60/61, Rome almost lost the province of Britain to a woman. Boudica, wife of the client king Prasutagus, fomented a rebellion that proved catastrophic for Camulodunum (Colchester), Londinium (London), and Verulamium (St. Albans), destroyed part of a Roman legion, and caused the deaths of an untold number of veterans, families, soldiers, and Britons. Yet with one decisive defeat, her vision of freedom was destroyed, and the Iceni never rose again.

Boudica: Warrior Woman of Roman Britain introduces listeners to the life and literary importance of Boudica through juxtaposing her different literary characterizations with those of other women and rebel leaders. This study focuses on our earliest literary evidence, the accounts of Tacitus and Cassius Dio, and investigates their narratives alongside material evidence of late Iron Age and early Roman Britain. Throughout the book, Caitlin Gillespie draws comparative sketches between Boudica and the positive and negative examples with which readers associate her, including the prophetess Veleda, the client queen Cartimandua, and the rebel Caratacus. Literary comparisons assist in the understanding of Boudica as a barbarian, queen, mother, commander in war, and leader of revolt.

Caitlin C. Gillespie is a Lecturer in Classics at Columbia University. She received her PhD in Classical Studies from the University of Pennsylvania. Her past publications have explored the intersection between material culture and literary representations of women of the imperial household during the Julio-Claudian era.