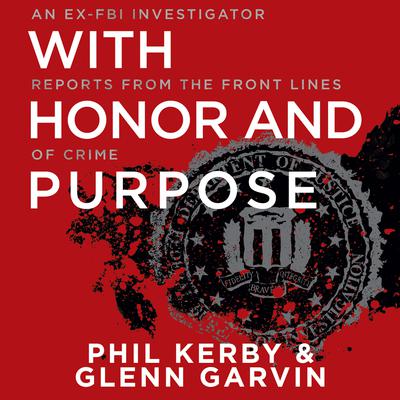 With Honor and Purpose: An Ex-FBI Investigator Reports from the Front Lines of Crime

By Phil Kerby  and Glenn Garvin
Read by Mel Foster

The most grueling missions. The most dangerous criminals. The ultimate insider.

Bank robbers. Pimps. Wise guys. Murderers...Today's FBI street agents face a never-ending parade of violence and chaos perpetuated by society's most dangerous and sometimes most demented felons. In this action-packed confession of an FBI man, Phil Kerby takes us on a white-knuckle ride through a career that pitted him against militia bombers and black militants, against hardened, hardcore kidnappers, coed hookers, biker drug dealers, bank robbers on the lam, and much, much more.

Here are hostage standoffs and cat-and-mouse games with the Mob. Here are nerve-shattering armed confrontations and heart-wrenching searches for missing people-or dead bodies. And here is the courage, skill, and grit of a few good men trying to fight America's dirtiest and most dangerous war-with honor and purpose...

A retired FBI field commander reports on his quarter-century with the bureau. Kerby joined the FBI in 1969 and was delighted by the princely salary of $11,626 and the opportunity to serve justice. He romanticizes the good old days to a certain extent. But he was a committed G-man, and devoted his life to solving bank robberies and busting up prostitution ringscrimes he thinks seem too small-time for FBI agents today. His early days at the Albany bureau were marked by several errors, such as the time he and a few other agents stopped a bank robbery by forming a circle around the would-be thieves and pointing their gunsthey would have ended up shooting one another. These days, writes Kerby, agents form an L around a suspect. Kerby is still incensed about Dog Ferguson, a big-shot pimp who liked to revisit his high school in Columbus, Ohio, with his best-looking girls draped on his arms. It drove Kerby to distraction that other agents let the pimp be, and he made catching the slippery Dog his top priority. Kerby's instincts were correct. Dog had contacts across the continent and was discovered to be among the most powerful pimps in the country. Dog also had many Ohio State University coeds on his payroll. Just days after one of his retired girls was seen talking to Kerby, she had a mysterious and fatal fall down her stairs. One of Kerby's sweetest moments was watching Dog go to jail. While short on the blockbuster crime-busting of other FBI memoirs, this book is full of intriguing details like the undercover agent who developed such a craving for bologna that he gained 60 pounds while on assignment that bring the FBI to life. An intelligent and welcome addition to a somewhat overloaded shelf.