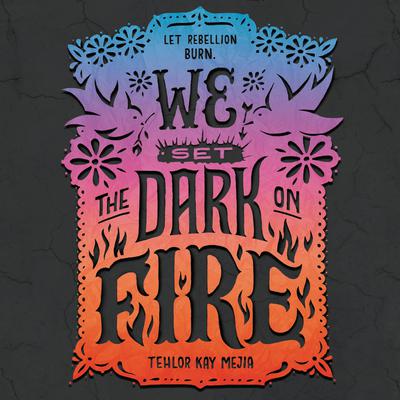 We Set the Dark on Fire

“We Set the Dark on Fire burns bright. It will light the way for a new generation of rebels and lovers.” —NPR

In this daring and romantic fantasy debut perfect for fans of The Handmaid’s Tale and Latinx authors Zoraida Córdova and Anna-Marie McLemore, society wife-in-training Dani has a great awakening after being recruited by rebel spies and falling for her biggest rival.

At the Medio School for Girls, distinguished young women are trained for one of two roles in their polarized society. Depending on her specialization, a graduate will one day run a husband’s household or raise his children. Both paths promise a life of comfort and luxury, far from the frequent political uprisings of the lower class.

Daniela Vargas is the school’s top student, but her pedigree is a lie. She must keep the truth hidden or be sent back to the fringes of society.

And school couldn’t prepare her for the difficult choices she must make after graduation, especially when she is asked to spy for a resistance group desperately fighting to bring equality to Medio.

Will Dani cling to the privilege her parents fought to win for her, or will she give up everything she’s strived for in pursuit of a free Medio—and a chance at a forbidden love?

“A vivid tale of political intrigue, power, and resistance that will thrill the hearts of readers.” —Traci Chee, New York Times bestselling author
“With lots of action and palace intrigue, the novel is a page turner.” —New York Journal of Books
“Kyla Garcia delivers a thrilling Latinx-themed fantasy…Garcia gives Dani an appropriately crisp and matter-of-fact voice, while Carmen, Dani’s sister wife, has a softer and more sensual tone…As Dani becomes embroiled in a secret plot to spy on her new husband, Garcia’s narration evokes the breathless danger of covert and deadly missions. Winner of the AudioFile Earphones Award.” —AudioFile
“We Set the Dark on Fire is dystopian YA as you’ve only dreamed it could be. Mejia’s story is specific yet universal, intricate and vast; it’s fire and smoke and the phoenix rising from the ashes.” —Tor.com
“An action-packed third-person narrative, smart dialogue, and lush descriptions offer readers a fresh and steely heroine in a contemporary coming-of-age story…Thrilling and timely.” —Kirkus Reviews (starred review)
“A complicated tale of love, intrigue, moral compromise, and action, with a prescient sensibility that echoes current headlines and political issues.” —Publishers Weekly (starred review)
“A richly constructed world full of fantasy and diversity, with a mystery that will keep [listeners] guessing until the very end.” —School Library Journal (starred review)
“This timely examination of how women move through the world is potent and precise, and readers will be eager for the sequel.” —Booklist (starred review)

Tehlor Kay Mejia is the author of the critically acclaimed young adult fantasy novels We Set the Dark on Fire and its sequel We Unleash the Merciless Storm, among other books. We Set the Dark on Fire received six starred reviews and was chosen as an Indie’s Next Pick, a Junior Library Guild selection, a Kirkus Reviews Best Book of the Year, and School Library Journal Best Book of 2019. It was also featured in Seventeen, Cosmopolitan, and O, The Oprah Magazine.