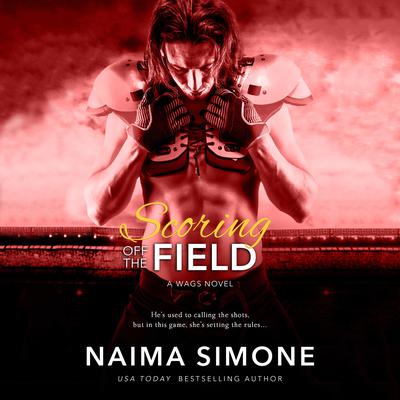 Scoring off the Field

Tennyson Clark is getting a life. First step: quitting her job as assistant to Dominic Anderson, star quarterback for the Washington Warriors, her best friend…and the man she’s been secretly in love with for years. But since the gorgeous, if overprotective playboy has only ever seen her as his BFF, she’s finally ready to relinquish her tattered fantasy and move on. Enter steps two and three: new job and new man.

Football is Dominic's life, and with his contract soon up for renewal, all his focus needs to be on the game. But Tennyson—dependable, logical Tennyson—is making that next to impossible with her mysterious new job and her sudden interest in online dating. He doesn’t do relationships. But the thought of another man touching her sexier-than-hell curves has him suddenly wanting more from his best friend.

Indulging in hot, dirty, what’s-my-name sex with no strings and lots of benefits is simple, uncomplicated…until it’s not.

Each book in the WAGS series is STANDALONE:
* Scoring with the Wrong Twin
* Scoring Off the Field

USA Today Bestselling author Naima Simone’s love of romance was first stirred by Johanna Lindsey, Sandra Brown and Linda Howard many years ago. Well not that many. She is only eighteen…ish. Though her first attempt at a romance novel starring Ralph Tresvant from New Edition never saw the light of day, her love of romance, reading and writing has endured. Published since 2009, she spends her days—and nights— writing sizzling romances with a touch of humor and snark. She is wife to Superman, or his non-Kryptonian, less bulletproof equivalent, and mother to the most awesome kids ever. They all live in perfect, sometimes domestically-challenged bliss in the southern United States.