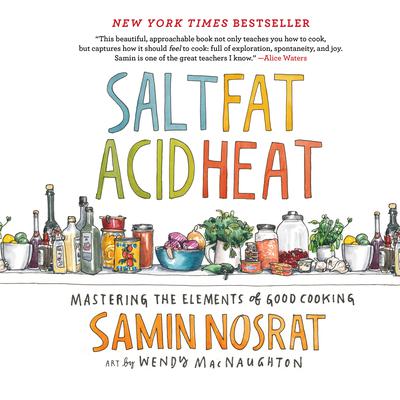 An Elle Magazine Pick of the Year

A Chicago Tribune Best Book of 2017

A Minneapolis Star-Tribune Pick of the Year's Best Books

A visionary new master class in cooking that distills decades of professional experience into just four simple elements, from the woman declared “America’s next great cooking teacher” by Alice Waters.

In the tradition of The Joy of Cooking and How to Cook Everything comes Salt, Fat, Acid, Heat, an ambitious new approach to cooking by a major new culinary voice. Chef and writer Samin Nosrat has taught everyone from professional chefs to middle school kids to author Michael Pollan to cook using her revolutionary, yet simple, philosophy. Master the use of just four elements—Salt, which enhances flavor; Fat, which delivers flavor and generates texture; Acid, which balances flavor; and Heat, which ultimately determines the texture of food—and anything you cook will be delicious. By explaining the hows and whys of good cooking, Salt, Fat, Acid, Heat will teach and inspire a new generation of cooks how to confidently make better decisions in the kitchen and cook delicious meals with any ingredients, anywhere, at any time.

Echoing Samin’s own journey from culinary novice to award-winning chef, Salt, Fat Acid, Heat immediately bridges the gap between home and professional kitchens. With a lighthearted approach to kitchen science, Samin demystifies the four elements of good cooking for everyone.

“[Nosrat is] a talented explainer.” —Wall Street Journal
“An exhaustively researched treatise on the four pillars of successful cooking.”- —New York Times Book Review
"Salt, Fat, Acid, Heat is written smoothly and casually…Nosrat’s wisdom is apparent in the way she instructs, which lets her cover food science without ever getting lost in the finer points of chemistry.” —The Atlantic
“Just reading Salt, Fat, Acid, Heat will make you a better cook, adept at seasoning, balancing, understanding what it really is you’re doing and why.” —Bon Appetit magazine
“In this excellent, accessible cookbook, Nosrat leads readers through the cooking process…This exceptional debut is sure to inspire greater confidence in readers and enable them to create better meals on their own.” —Publishers Weekly (starred review)
“Samin Nosrat’s narration of her innovative cooking guide is informative and conversational…She distills the complexities of the kitchen to four essential elements—salt, fat, acid, and heat—and examines each with an approachable narration…Don’t listen without access to the beautifully illustrated companion cookbook, as the audiobook covers only the first portion. The second half details techniques and recipes.” —AudioFile