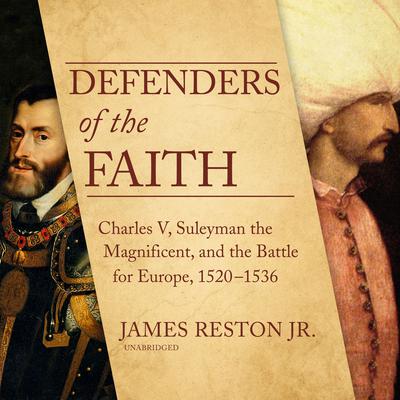 Defenders of the Faith: Charles V, Suleyman the Magnificent, and the Battle for Europe, 1520–1536

In the bestselling Warriors of God and Dogs of God, James Reston Jr. limned two epochal conflicts between Islam and Christendom. Here he examines the ultimate battle in that centuries-long war, which found Europe at its most vulnerable and Islam on the attack. This drama was propelled by two astonishing young sovereigns: Holy Roman Emperor Charles V and Turkish sultan Suleyman the Magnificent. Though they represented two colliding worlds, they were remarkably similar. Each was a poet and cultured cosmopolitan; each was the most powerful man on his continent; each was called “Defender of the Faith”; and each faced strident religious rebellion in his domain.

With Europe newly hobbled and the Turks suffused with restless vigor, the stage was set for a drama that unfolded from Hungary to Rhodes and ultimately to Vienna itself, which both sides thought the Turks could win. If that happened, it was generally agreed that Europe would become Muslim as far west as the Rhine.

During these same years, Europe was roiled by constant internal tumult that saw, among other spectacles, the Diet of Worms, the Sack of Rome, and an actual wrestling match between the English and French monarchs in which Henry VIII’s pride was badly hurt. Would—could—this fractious continent be united to repulse a fearsome enemy?

“[An] interesting display of fact, description, and narrative to elucidate a pivotal point in history.” —Booklist
“[A] vibrant piece of intellectual history…Reston…brings to life two Olympian figures who believed they were carrying out the will of God.” —Publishers Weekly

James Reston Jr. is a senior scholar at the Woodrow Wilson International Center for Scholars. The author of more than a dozen books, including Warriors of God and Dogs of God, he lives in Chevy Chase, Maryland.