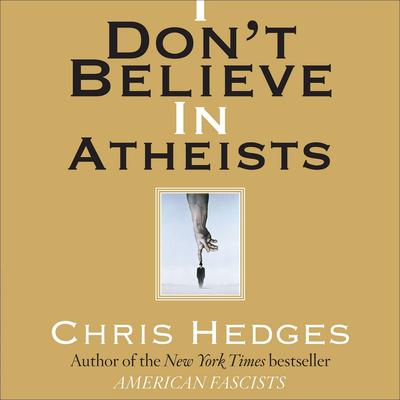 I Don't Believe in Atheists

The New York Times bestselling author, Chris Hedges, speaks out against those who attack religion to advance their own agenda: global capitalism, intolerance, and imperial projects.

There are two radical and dangerous sides to the debate on faith and religion in America: Christian fundamentalists, who see religious faith as their exclusive prerogative, and New Atheists, who brand all religious belief as irrational. Too often, the religious majority—those committed to tolerance and compassion as well as their faith—are caught in the middle.

Chris Hedges critiques the mindset that rages against religion and faith. He accuses the New Atheists—led by Sam Harris, Richard Dawkins, and Christopher Hitchens—of promoting a belief system that is not, as they claim, based on reason and science, but on a simplified worldview of us vs. them, intolerance toward behaviors that are not understood, and the false myths of human progress and moral superiority. Ultimately, he makes way for new, moderate voices to join the debate. A timely, compelling work for anyone who wants to understand the true state of the battle about faith today.

Chris Hedges is a Pulitzer Prize–winning journalist, host of the Emmy Award­–nominated RT America show On Contact, and author of two New York Times bestsellers. War Is a Force That Gives Us Meaning was a finalist for the National Book Critics Circle Award. He was a foreign correspondent and bureau chief in the Middle East and the Balkans for fifteen years for the New York Times. He previously worked overseas for the Dallas Morning News, Christian Science Monitor, and NPR. He holds a Master of Divinity from Harvard University and has taught at Columbia University, New York University, Princeton University, and the University of Toronto. He has taught college credit courses through Rutgers University since 2013 in the New Jersey prison system.