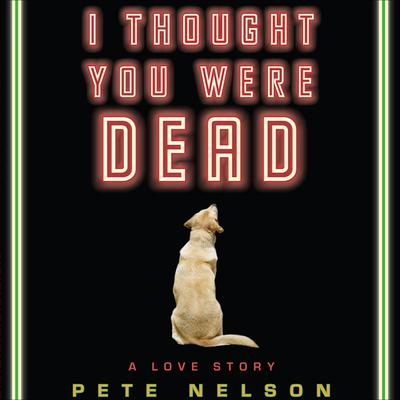 I Thought You Were Dead: A Love Story

For Paul Gustavson, a hack writer for the wildly popular For Morons series, life is a succession of obstacles. His wife has left him, his father has suffered a debilitating stroke, his girlfriend is dating another man, he has impotency issues, and his overachieving brother invested his parents' money in stocks that tanked. Still, Paul has his friends at Bay State bar, a steady line of cocktails, and a new pair of running shoes (he's promised himself to get in shape). And then there's Stella, the one constant in his life, who gives him sage advice, doesn't judge him, and gives him unconditional love. However, Stella won't accompany Paul into his favorite dive bar. "I'll roll on dead carp, I'll even eat cat turds, but that place grosses me out." Stella, you see, is Paul's aging Lab-shepherd mix, and she knows Paul better than he knows himself.

In I Thought You Were Dead, author Pete Nelson delivers a novel that is all at once heartwarming, heartbreaking, and heart-wrenchingly funny. Most of all, it's a story that proves that when a good dog is by your side—especially one with whom you can have an engaging conversation—life can be full of surprises.

Pete Nelson is the author of several books, including Left for Dead. He is also a singer-songwriter with a select but devoted following. He is not, however, the Pete Nelson who writes books about tree houses, although he has nothing against them. He lives in Westchester County, New York.