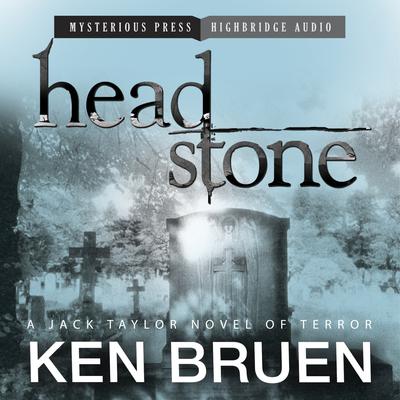 Acclaimed Irish crime writer Ken Bruen has won numerous awards for his hard-charging, dark thrillers, which have been translated into ten languages. In Headstone, an elderly priest is nearly beaten to death and a special-needs boy is brutally attacked. Evil has many guises and Jack Taylor has encountered most of them, and has the scars to prove it. But nothing before has ever truly terrified him until he confronts an evil coterie named Headstone, who have committed a series of random, insane, violent crimes in Galway, Ireland that leave even the national police shaken. And Jack is especially vulnerable now that he has finally found love and happiness.

Jack, slowly accepting the sheer power of Headstone, comes to realize that in order to fight back he must relinquish the remaining shreds of what has made him human. Headstone barrels along its deadly path right to the center of his life and the heart of Galway. In a moment of awful clarity, Jack realizes that not only might he be powerless to stop Headstone; he may not have the grit needed to even face it. A terrific read from a writer called “a Celtic Dashiell Hammett,” Headstone is an excellent addition to the Jack Taylor series.

“Headstone is an excellent addition to the Jack Taylor series.” —Philadelphia Inquirer
“Hard hitting…a remarkable series.” —Publishers Weekly
“A nonstop rampage of intrigue, mayhem, lunacy and dark-dark-dark humor.” —Shelf Awareness
“Ken Bruen is brilliant. While Headstone is the stuff of nightmares, it is also the stuff of redemption, even at great cost. You will feel wrung out after reading this one, but all the gladder for it.” —Bookreporter