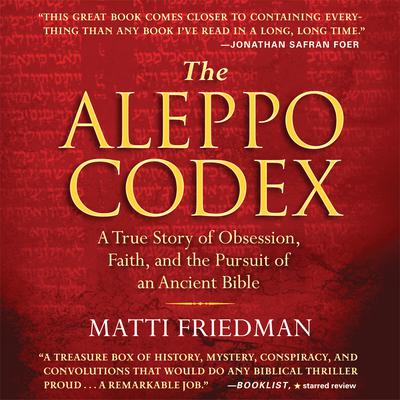 The Aleppo Codex: A True Story of Obsession, Faith, and the Pursuit of an Ancient Bible

A true-life thriller about the journey of one of the world’s most precious manuscripts—the 10th century annotated Hebrew Bible known as the Aleppo Codex—from its hiding place in an ancient Syrian synagogue to the newly-founded Israel. Using his research, including documents which have been secret for 50 years and interviews with key players, AP correspondent Friedman tells a story of political upheaval, international intrigue, charged courtroom battles, obsession, and subterfuge.

Matti Friedman’s work as a reporter has taken him from Lebanon to Morocco, Cairo, Moscow and Washington, D.C., and to conflicts in Israel and the Caucasus. He has been a correspondent for the Associated Press, and his writing has appeared in the Wall Street Journal, the New York Times, Tablet Magazine, and elsewhere. He grew up in Toronto and lives in Jerusalem.