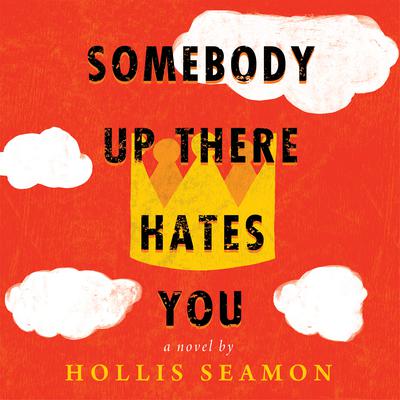 Somebody Up There Hates You

An AudioFile Editors’ Pick of YA Books for April 2014

Smart-mouthed, funny, and sometimes crude, Richard Casey is in most ways a typical seventeen-year-old boy. Except Ritchie has cancer, and he’s spending his final days in a hospice unit. His mother, his doctors, and the hospice staff are determined to keep Ritchie alive as long as possible. But in this place where people go to die, Richie has plans to make the most of the life he has left.

Fifteen-year-old Sylvie, the only other hospice inmate under sixty, has plans of her own. What begins as camaraderie soon blossoms into love, and the star-crossed pair determine together to live life on their own terms in whatever time they have.

Hollis Season has created one of the most original voices in young adult literature, narrating a story that is unflinching, graphic, heart-breaking, funny, and above all, life-affirming.

“Each character is vividly drawn, with a sharp, memorable voice that readers will love and remember…A fresh, inspiring story.” —Kirkus Reviews (starred review)
“Heartfelt…The language is raw and even profane at times, but hardly inappropriate given the circumstances…This novel is respectful of its serious subject matter, yet is an entertaining and heartening read.” —School Library Journal
“A tender, insightful, and unsentimental look at two teens in extremis. It brings light to a very dark place and, in so doing, does its readers a generous service.” —Booklist
“Readers will alternate between shaking their heads at his self-centeredness, laughing at his smart mouth, and reaching for tissues as Richard really learns what it means to grow up…Emotions are raw and painful, but the story is a powerful and life-affirming look at what it means to grow up as your life is ending.” —VOYA
“Galvin’s narration captures the novel’s conversational, storytelling style and creates a compelling, unsentimental listening experience.” —Booklist (audio review)
“Narrator Noah Galvin doesn’t hold back on Richie’s dark, sarcastic tone, especially as he sneers at the sappy harpist whose music ‘seems a bit premature,’ especially for dying teenagers like him and Sylvie. When fifteen-year-old Sylvie tells him she doesn’t want to die a virgin, a smile hovers in Galvin’s voice as Richie realizes it’s never too late to turn into the popular guy and life is ‘all about surprises.’ Galvin also portrays the tender Sylvie and the nurses who care and grieve for the dying, but they form an emotional backdrop. Galvin keeps Richie in the foreground, noting his wonder, and anger, with heartbreaking intensity. Winner of AudioFile Earphones Award.” —AudioFile

Hollis Seamon is a recipient of a fiction fellowship from the New York Foundation for the Arts. She is a professor of English at the College of Saint Rose in Albany, New York, and also teaches in the MFA creative writing program at Fairfield University in Fairfield, Connecticut.