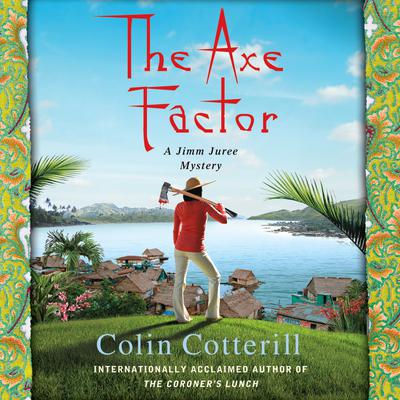 Since Jimm Juree moved, under duress, with her family to a rural village on the coast of Southern Thailand, she has missed her career as a journalist. In Chiang Mai, she was covering substantial stories and major crimes. But here in Maprao, Jimm has to scrape assignments from the local online journal, the Chumphon Gazette. This time they are sending her out to interview a local farang (European) writer, Conrad Coralbank, who writes award-winning crime novels. At the same time, several local women have left town without a word to anyone, leaving their possessions behind. These include the local doctor, Dr. Sumlak, who never returned from a conference, and the Thai wife of the aforementioned Conrad Coralbank. All of which looks a little suspicious, especially to Jimm’s grandfather, an ex-cop who notices Coralbank’s interest in Jimm with a very jaundiced eye. And now a major storm is brewing. Who knows what it will blow in for Jimm and her family?

“Elegant and always amusing.” —Dayton Daily News
“In addition to a clockwork plot and an intriguing setting, what really makes this book sing is Jimm’s own caustic, ribald observations. A stunner of a novel, third in the Jimm Juree series by the author of the acclaimed Dr. Siri novels.” —Booklist (starred review)
“Cotterill’s outstanding third Jimm Juree mystery…Despite the grimness of the violence and the corruption Juree eventually uncovers, Cotterrill keeps the tone light, aided by the conceit of starting each chapter with Thai signage, replete with malapropisms (e.g., ‘Ladies are Requested not to Have Children in the Bar’).” —Publishers Weekly (starred review)
“Restless reporter teams up with veteran crime writer of questionable character to solve a series of disappearances…Creepy unattributed blog entries woven into the tale, presumably from the killer, add tension, and an impending storm raises the stakes. Jimm’s third case continues her evolution from inveterate wisecracker to believably flawed and funny heroine. The result is a perfect balance between droll comedy and serious plotting.” —Kirkus Reviews
“Narrator Kim Mai Guest captures the eccentricities of each character and the unique dynamics of the family. The most notable elements of Guest’s narration include the endearing tone she uses to portray the mother’s dementia-driven statements; the biting sarcasm of Jimm’s transgendered sister, who rattles off advice at lightning speed on everything from love to crime solving; and the eerily calm assurance of Jimm’s new British boyfriend, who hides a sinister secret. Guest does the story’s climax proud with one hair-raising scene after another as Jimm waits for the axe to fall.” —AudioFile