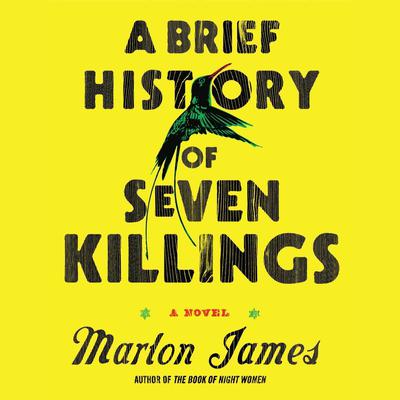 A Brief History of Seven Killings

Winner of the 2015 Man Booker Prize

Winner of the 2015 American Book Award

Winner of the Anisfield-Wolf Book Prize

A Salon Best Audiobook of the Year for 2014

On December 3, 1976, just before the Jamaican general election and two days before Bob Marley was to play the Smile Jamaica Concert, gunmen stormed his house, machine guns blazing. The attack nearly killed the Reggae superstar, his wife, and his manager, and injured several others. Marley would go on to perform at the free concert on December 5, but he left the country the next day, not to return for two years.

Deftly spanning decades and continents and peopled with a wide range of characters—assassins, journalists, drug dealers, and even ghosts—A Brief History of Seven Killings is the fictional exploration of that dangerous and unstable time and its bloody aftermath, from the streets and slums of Kingston in the 1970s, to the crack wars in 1980s New York, to a radically altered Jamaica in the 1990s. Brilliantly inventive and stunningly ambitious, this novel is a revealing modern epic that will secure Marlon James’ place among the great literary talents of his generation.

“A Brief History of Seven Killings is my favorite audiobook…A really good audiobook and largely because they got a really good cast to represent his writing…because I both read the book and listened to the audiobook.” —Tommy Orange, New York Times bestselling author
“Nothing short of awe-inspiring.” —Entertainment Weekly
“An excellent new work of historical fiction…part crime thriller, part oral history, part stream-of-consciousness monologue.” —Rolling Stone
“[A] tour de force…[an] audacious, demanding, inventive literary work.” —Wall Street Journal
“A prismatic story of gang violence and Cold War politics in a turbulent post-independence Jamaica.” —New Yorker
“It’s epic in every sense of that word: sweeping, mythic, over-the-top, colossal, and dizzyingly complex. It’s also raw, dense, violent, scalding, darkly comic, exhilarating and exhausting.” —New York Times
“Seven killings? That’s just for starters. This compelling, not-so-brief history brings off a social portrait worthy of Diego Rivera…James proves especially adept at criminal power dynamics…What most distinguishes A Brief History of Seven Killings isn’t the outrages but the odyssey.” —Washington Post
“[A] magisterial, viscerally lyric epic…[of] turf wars, ambitions, passions, whims, and blood lust that drove the culture of violence before and after 1976.” —Barnes&Noble.com
“One of the best books I’ve read all year…The characters are real, they are engaging, and James uses them to look at all sides of the story.” —Amazon.com
“I read James’ brilliant epic novel about crime, music and politics in 1970s Jamaica by going back and forth between the printed book and this multinarrator recording. All the performances are electrifying, although Cherise Boothe as a perpetually disgusted would-be emigrant is glorious and fiery and funny. Hearing the Caribbean lilt of the Jamaican characters’ voices deepens the novel’s flavor. Having the pages to refer to makes it easier to revisit passages whose finer points you might miss as you’re swept along in magnificent tide of James’ vision.” —Salon (audio review)
“A virtuosic performance detailing three turbulent decades in Jamaican history…The voices of government agents, gang members, ex-girlfriends, and ghosts all contribute, and the result is shocking, cerebral, and exhilarating.” —Publishers Weekly (starred review)
“James…writes unflinchingly about the violence, drug-fueled and coldblooded, that runs through the island’s ghettos.” —Kirkus Reviews
“The seven narrators of this Man Booker Prize-winning novel set the stage for a complicated, lengthy narrative…believably narrated with American and Jamaican accents. Most of the narrators’ patois is thick, raw, and rich with texture. One narrator portrays an American who imitates a Caribbean accent, which adds a humorously painful aspect to the story. Yet the undercurrent of unrest in the characters’ personal lives is palpable in the performances. Overall, the ensemble of voices enhances an uncomfortable venture into a dangerous world.” —AudioFile