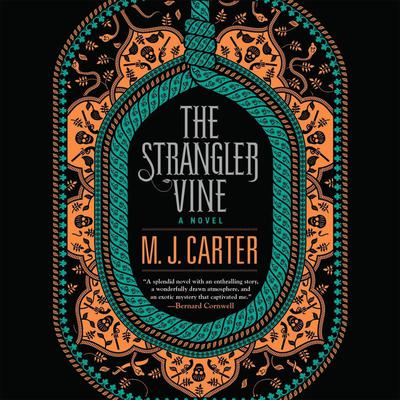 The Strangler Vine: A Novel

Longlisted for the 2014 Bailey's Women's Prize for Fiction

A 2016 Winner for theALA Listen List for Outstanding Audiobook Narration

Set in the untamed wilds of the nineteenth-century colonial India, a dazzling historical thriller introducing an unforgettable investigative pair.

India, 1837: William Avery is a young solider with few prospects except rotting away in campaigns in India; Jeremiah Blake is a secret political agent gone native, a genius at languages and disguises, disenchanted with the whole ethos of British rule, but who cannot resist the challenge of an unresolved mystery. What starts as a wild goose chase for this unlikely pair—trying to track down a missing writer who lifts the lid on Calcutta society—becomes very much more sinister as Blake and Avery get sucked into the mysterious Thuggee cult its even more ominous suppression.

“A splendid novel with an enthralling story, a wonderfully drawn atmosphere, and an exotic mystery that captivated me.” —Bernard Cornwell, New York Times bestselling author
“In the great detective novel tradition of The Moonstone and the Sherlock Holmes series…With gorgeous historical detail and deft characterization, Carter creates a rip-roaring detective romp—while also casting a gimlet eye on the effects of British imperialism and colonization of India.” —Susan Elia MacNeal, New York Times bestselling author
“A witty and entrancing historical thriller…An inspired mix of sensation novel and odd-couple road novel, The Strangler Vine has a smirking sense of the absurdity of the whole colonial project.” —Guardian (London)
“Enthralling…More than just a picturesque quest through exotic lands. Carter makes a subtle critique of how fact and fiction, myth and history intertwine.” —Washington Post
“You feel yourself to be in India…As well as being a rattling good yarn in the traditions of G. A. Henty or Rudyard Kipling, this is also a well-informed and enlightened modern book that has a properly skeptical view of imperialist propaganda. I do not remember when I enjoyed a novel more than this.” —Financial Times
“The quest takes some surprising turns, and Carter is masterly at keeping the reader guessing what’s really going on. The final revelation is jaw-dropping” —Publishers Weekly (starred review)
“Shades of H. Rider Haggard and Rudyard Kipling! Fans of the old-school adventure genre, in which brave heroes plunge into an unspeakable wilderness, finding danger at every step, should rejoice…An absolute corker of a read, with marvelous characterization and trenchant historical analysis.” —Booklist (starred review)
“From the thrilling prologue to the satisfying conclusion…[it] hooks the reader into a ripping adventure ride, full of danger, conspiracy, and trickery. Carter’s clever historical thriller is a winner.” —Library Journal (starred review)
“[An] uneasy partnership and small band of native soldiers are given authentic voice through the judicious narration of Alex Wyndham. His narration highlights the bright enthusiasm of Avery, which contrasts sharply with the world-weariness of Blake, a man who has seen too much and feels greater comfort in the company of locals. Wyndham immerses the listener in their quest and developing relationship, while convincingly delivering both native and British accents.” —AudioFile